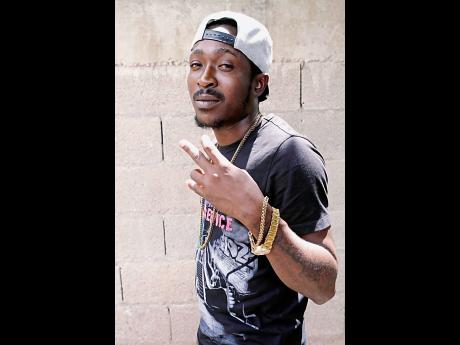 Dancehall deejay Blak Ryno says that he is so totally fed up with all the rumours that have been circulating about him throughout the years, he now simply ignores them until, hopefully, they go away. However, the deejay, in an apparent fightback, or perhaps capitalising on the free publicity, on Sunday previewed a song titled Rumours.

Two weeks ago, could have been dubbed Blak Ryno Week, as the former Portmore Empire/Gaza artiste emerged from relative obscurity to have his name and face splashed across social media, on blogs, and even in respectable news outlets.

The headlines ranged from Blak Ryno being critical in hospital to him resting comfortably following what was said to be a serious accident in New York.

The writers of the various stories all quoted unnamed sources “close to the deejay.”

As the story grew legs, fuelled, in part, by the deafening silence from Blak Ryno and his team, there were even some fans who started questioning whether or not the entertainer had died. He eventually emerged from the shadows to post a video to social media, quashing the rumours.

“Over the years, people have always been saying these negative things about me,” Ryno told The STAR. “Last year, they said that I had cancer, before that it was something else. You really can’t follow up everything. When I first heard, all I could think is that these people were referring to an accident that my wife and I were involved in back in January. The bloggers get a story and say it come from my camp, but nobody told them anything like that.”

Quizzed as to why he didn’t immediately pour cold water on the rumours, he said, “Nobody cared about it. It was just another rumour to be ignored.”

Ryno added that he really didn’t want to respond, “because I didn’t start this rumour, so I shouldn’t have to be the one to stop it”.

However, for the sake of his fans, who were supposedly hurting, Ryno finally revealed himself, looking robust and healthy, without a scratch or blemish.

Ryno’s woes, however, didn’t end there, because social media and blogs then made new headlines that suggested that the accident was a publicity stunt to promote a new song.

But Ryno, given name, Romaine Anderson, swears that this isn’t so.

“It was not a publicity stunt,” Ryno emphasised. “Look at it this way, everybody was calling for interviews and I didn’t do any. Wouldn’t it defeat the purpose for it to be a publicity stunt and then not do the interviews?” he asked.

However, the song in question, Psalm 35, was being played in the background while Ryno was doing his “I wasn’t in an accident” video.

“Yeah, dem want me dead, so I had to play that song. I could play any song I want,” he said. “However, I really want to apologise to my fans for the emotional stress, and let them know to stay tuned because I will be in the place real soon. ASAP,” he told The STAR .