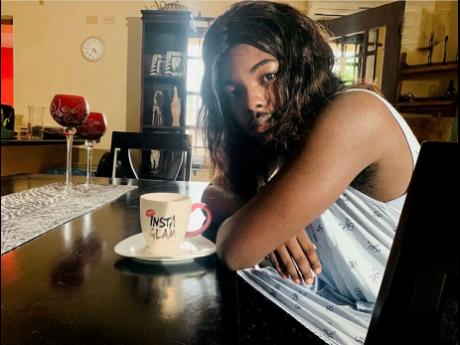 He sits at the dining table in a house dress. His hair (wig) falls on to his shoulders and he appears to be wearing make-up. He makes no attempt to disguise the hair bundled in his armpit or the moustache and beard on his unmistakable face.

Who could this be? He is Devin Di Dakta, a Grammy-nominated artiste.

Shelly Ann Curran, CEO of John John music, the label responsible for the Grammy-nominated artiste, said all will be revealed this weekend.

"Art needs no explanation, and obviously, my artiste is a musician, a true artiste, and so everyone can look out for new music this Friday," she said.

Devin, a former Magnum King of the Dancehall, posted the much talked-about photo on his Instagram page with the caption: "Ain't nothing wrong with transformation. Be CONFIDENT and do YOU!!! Always wanted to share this side of me. Friday you'll see."

While some persons interpreted the post as a promotional stunt for an upcoming project, others saw it as a desperate attempt to grab attention. It also attracted comments from persons who used it as an attempt to question his sexuality.

For Curran, 'focus' is the watchword in this big entertainment arena.

"As it relates to whatever picture has come out, I would say we are on the international level. If you ask Wesley Snipes, Arnold Schwarzenegger and all those big actors that happen to play a part, ask them if they have fallen off their throne. We are just normal people trying to stay in a creative space, and again I will say, art needs no explanation," she said.