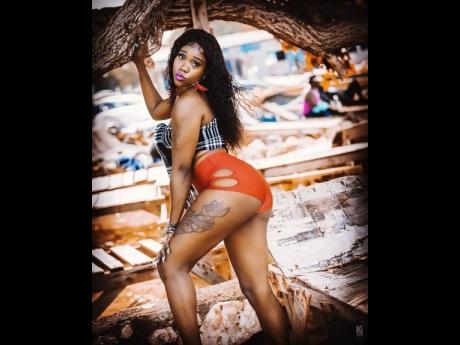 Contrary to reports that surfaced online on the weekend, recording artiste Sheba says her significant other has never laid hands on her.

"My boyfriend never beat me up," Sheba told THE STAR. "For the past two years I've been in this relationship, that man never lick me, all when mi rail like me a bull cow. All when mi tump him and dem bounce off him like when yuh fling sponge pon wall, him never lick mi, not once." She believes that someone has been using social media to spread lies about her, including that she was attacked by a gang of women in Florida.

"It's just somebody a try start a little slander because you know my name salt, it bury a seaside. So once they start some likkle rumour or foolishness with me, people always a run with it. If nobody or no man fi ever beat me, dat a something weh mi a go definitely come pon the 'net come talk," she said. The entertainer, who has been more focused on other ventures and interests including acting, said it is unfortunate that people readily gravitate to negativity even when the stories are untrue.

"Mi always a mind mi own business and mi ever inna something. It's like mi irrelevant but mi always relevant, mi nuh understand. Mi nah do music, mi definitely stop that so mi nah fi inna the public eye, and all when mi try that, it still nah work so what should I do?" she asked.

Once quick to clap back, Sheba said that she is on a different path and only hopes that people can be wary about what they consume through the media.

"Mi stop act like a virago and address everything, that's not what I'm on right now. I'm like two years from 40, mi nav nuh time for certain things again. Belief kills and belief cures so choose weh fi believe very wisely. Ninety per cent of the things on the media is a front, so just be careful what unno believe. Not everything that seems appealing to the reader is 100 accurate," she said.