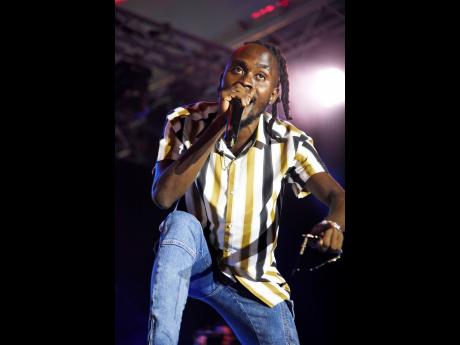 Dancehall deejay Laa Lee will perform on one of the biggest summer reggae festivals this weekend, using the opportunity to unveil a new track.

Billed for Festival Night 2 of Reggae Sumfest 'The Return', Laa Lee said he is anxiously awaiting curtain call to make his appearance.

"I honestly don't know how to feel or how I should be feeling. I'm just anticipating that moment for me to go on stage and waiting to deliver what I have to deliver," he told THE WEEKEND STAR.

In addition to performing his hits, such as Watz On Sale, Dirt Bounce and Bird, Laa Lee will use the event to perform his latest single Bong Bing and another track from the EP he is slated to release by the end of summer. He has been warming up for the stage over the past week and, having performed for a large audience in Poughkeepsie, New York, which was a mixture of US citizens and members of the Caribbean diaspora, he feels prepared to take on the diverse crowd that is expected to be at Reggae Sumfest.

"I have quite a number of tracks I am currently working on, especially because I'm working on my EP. I figure it would be a great time to drop another song that is a part of the track list. We dropped Bong Bing to kick-start the summer and it went well. So I wanna test the festival crowd," Laa Lee shared. "Let's see what happens again. The time allotted for my performance is so short, so yuh not really going get to enjoy yourself that much." He said that he does not have enough freedom to make too many additions to the planned set.

"Other than my own performance, I'm looking forward to see Beres Hammond live, performing for the large audience," he said.

The 24-year-old was recently spotted participating in the revelry of the 2022 Carnival in Jamaica road march but said that, while he likes soca music, he is not particularly leaning towards making music for that audience so soon. Laa Lee said that he is grateful for the attention that he has been receiving, though he has had to make some attitude adjustments.

"It has been difficult building a brand because, when your name becomes a brand, certain things yuh cyaa do like weh yuh used to do," he said. "People also realise this and will test you. You have to be on your guard always."