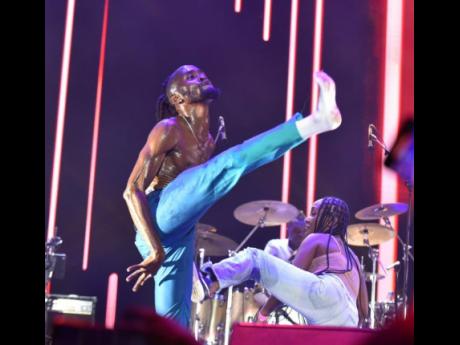 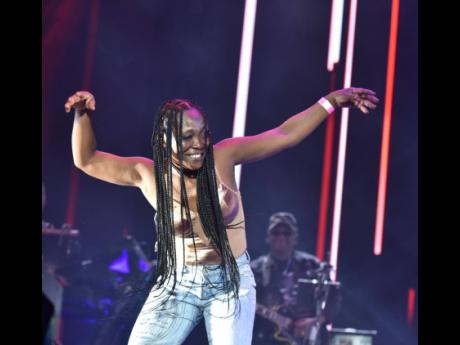 Our cameras caught Jessmi Nicholson mid-flight as she shows off her dance moves doing the leggo di bird.
1
2

Jessmi Nicholson is beaming with pride after watching her son, dancehall entertainer Laa Lee, perform in front of a massive audience at Reggae Sumfest.

She has been waiting on the moment since 2018 when he was first billed to perform for the festival but did not get his moment of fame, she told THE STAR.

"I really wanted to see him perform, but I doh really know wah did guh down, but me did deh here a wait to see him work the crowd," said Nicholson, who described her son as "determined and a fun character."

Nicholson, a higgler based on downtown Kingston's busy North Parade street, shared that she always believed in his potential to become a star but thought it would be in comedy.

She said, "I know him as a comedian [so] I never see this coming. I don't think him choose music, a nuh him choose it at all, music choose him."

Nicholson and Laa Lee shared a moment during his performance when he surprised her by asking audience members to lift her onto the stage for a dance-off to her favourite song, Bird.

"It was my first time on a stage with him, and honestly, I wasn't nervous because me love stage show and entertainment. We haven't been to much shows together," she said. "It was amazing to see him on stage and the people enjoying his performance; him mature enough now that he can bring the energy for any audience. Watching my son makes me overjoyed; sometimes I laugh, sometimes I cry."

The emotional matriarch, who has two sons and a daughter, said that her parenting methods are not traditional and that most will not agree with them.

"Me grow my children rough, very rough. Sometimes you have to tear dem down, bring dem ego down to a level. I used to cuss him when me at the stall a sell and him nuh stay. When me look fi him and find him, me tell him yuh mus be wutless and yuh a guh turn cruff. I always hear his voice saying, 'As long as I live, I will never become no form of cruff,' and he proved me wrong."

She said she always knew he would excel in the studies he pursued "no matter the direction", whether a dancer or a footballer.

"I can't tell you I saw this profession coming. Just always see the gimmicks side, not the business side, and I'm happy he was not the type of person to keep malice or be upset. All my children, dem just laugh after me. Laa Lee has made me feel good. He is a fun, loving and respectful man," Nicholson said.