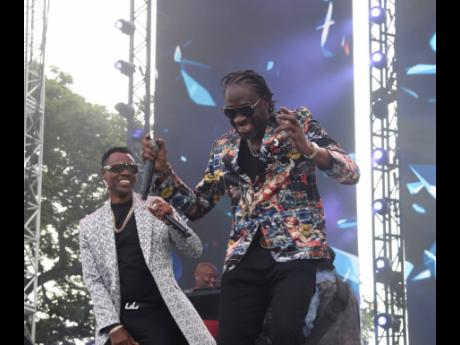 Louie Culture, who turned 54 in May, has made the argument that 90s dancehall and reggae music is in high demand outside of Jamaica.

The discussion surrounding the relevance of the era and its influence on the emerging generation of artistes was inspired by the Madhouse Records/Dave Kelly Tribute segment of Festival night two of Reggae Sumfest 2022 held at the Catherine Hall Entertainment Complex in Montego Bay. Though not part of the main group of entertainers paying tribute to the iconic producer, Louie Culture, also known as Mr Gangalee, who had joined Dexta Daps on stage, performed some of his greatest hits from the era.

"Most of the tunes were Dave Kelly-produced songs. I don't know the reason they never put me in this tribute segment but my set showed that the 90s are still loved. The only one that wasn't of Dave's doing is Gangalee," Louie Culture told THE STAR. He performed Big and Bold ('Medicine' rhythm), No Gal ('Pepperseed' rhythm) and Live and Learn ('Action' rhythm) of the Madhouse Records label, which he claimed was his own personal tribute to the era. The latter was a collaboration with Wayne Wonder, who was one of the seven dancehall acts paying homage to Kelly. Cham, Frisco Kid, Bounty Killer, Beenie Man, Spragga Benz and Mr Easy were the others.

Among the tracks delivered were Beenie Man's Hypocrite, Wayne Wonder's Searching Dem Searching and Cham's Galang Gyal on the 'Showtime' rhythm, Frisco Kid's Likkle and Cute on the 'Medicine' rhythm and more from the popular 'Murderation', 'Fiesta', 'Haunted', 'Stink' and 'Joyride' rhythms. Louie Culture expressed that 90s productions "are not forgotten" but that they do not get hailed for their contribution to the culture as it should.

Louie Culture said, "When you go abroad these are the songs or this is the era people want and love to hear. So Jamaica as the factory, supposed to support it and give it more respect. Put more respect on 90s music, especially disc jockeys, they need to play more of these songs, not only for throwback events."

Beenie Man expressed that Kelly played a pivotal role in his career and his exposure. One of his breakthrough singles, Slam, was on Madhouse Records' 1995 'Arab Attack' rhythm.

" Gimme di gyal wid di wickedest slam, yeah man, that is Dave and I can tell you he has produced more than 12 songs for me. Slam [Arab Attack] is my favourite riddim of them all," he said. "Dave come inna my career after me and Bounty Killer war thing, after Sting 1993, and did quite a few hits, even work with me and Little Lenny on Shocking Vibes 'Gun Inna Baggy' riddim. There's much to be said about his contributions."

Grammy Award-winning culture sensation Koffee, who also graced the festival stage, shared that many of the songs were often played in her childhood home.

"My mother used to listen to them; I would hear them in the house regularly. He [Kelly] has offered a lot of inspiration. Growing up, I feel like his music would have been a big part of my inspiration and part of my sound," said Koffee.