Moyann wants to be a voice for Montego Bay and women 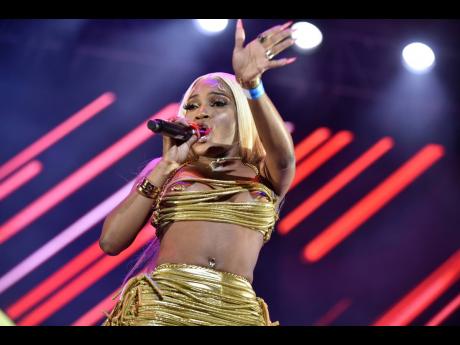 Dancehall starlet Moyann is making her mark as a female voice and force to be reckoned within the music industry.

Following her performance at Reggae Sumfest last weekend, the reviews from the audience was that they believed the Montego Bay-born artiste deserved a later, prime spot on the show. But Moyann was just satisfied with the opportunity to perform.

"It has been challenging because of the pandemic. When you are locked away and don't get to interact with your fans or an audience from a stage, you risk the chance of losing that real connection that you can't get from being a digital device. Now, we're back, and girl deh pon Sumfest!" she told THE STAR.

As one of the few females in an army of male up-and-coming recording artistes to emerge from the Second City, Moyann is determined to let her name be synonymous with the best of the best.

"I was super nervous. Every time, before I go on a stage, I feel like I want to run and scream. But when I'm on stage I can't feel anything. I'm super proud of myself," Moyann said, following her performance.

"It is very important for me to stand out even though, overall, the music industry is male-driven, or dominated. But I'm just being myself, relating to my supporters, connecting with them. I can only do that to be closer with them and let them see the type of artiste I am, and stay with me on this journey," she continued.

Small in stature, Moyann's big voice held the audience's attention as she performed Boss Up, A Nuh My Style, Backseat, No Limit (a collaboration she recorded with Shenseea) and How We A Live. While on stage, she said that as an entertainer from Montego Bay, she could not deliver a mediocre performance and that she aims to represent well for independent women from St James and on a global level.

"I hate the way women are mistreated, and me hate say there is little to no respect fi we. So many girls are going missing, abused or killed. See how me likkle...me 'fraid, but I haven't personally experienced abuse or violence. But I have seen it first-hand with friends; and trust me, we live in a country where we don't have a voice. It is so sad what women go through and don't have anyone to defend us. Me a get emotional fi talk about it. We need to do better as a country," Moyann said.

The singjay is currently working on an EP. She will also be releasing several tracks with accompanying music videos before the end of summer.