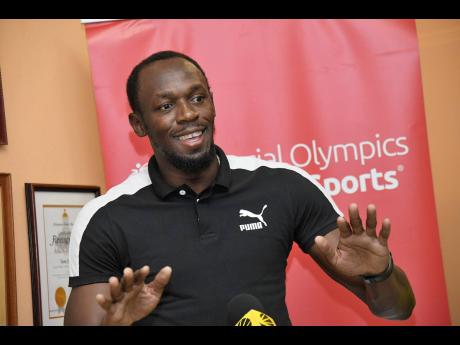 Eight-time Olympic gold medallist Usain Bolt says that he is learning to "never be too rigid" with the creative process, as he continues to invest more time and money in the music business. The sprint legend-turned-music producer has managed to stay focused on the goals he has set for himself and the A-Team Lifestyle record label, despite the noise that still surrounds his name.

"I am quickly learning that each [music] project takes on its own journey. With what my parents taught me from a tender age, to just focus on what I'm trying to achieve, and adding the positivity and progress taking place in my life, I don't worry or have the time to focus on critics," Bolt told THE STAR.

His latest project, the '9.58' rhythm compilation, which features hitmakers Vybz Kartel and Chronic Law, was ready for release for some time.

He said "We produced it where it wasn't dated. It could have been released anytime, but with the energy around my world record and I, naming the rhythm '9.58' from before all of that, it was just the right time to drop the project now ... overall it was just about finding the right time." Bolt opined that the rhythm will definitely create a buzz because it is energetic and speedy.

"The key is what vibes give you that constant feel-good energy. Everybody knows what I'm about, [so] thankfully, I have never had to tell an artiste what to write. I respect the artistes' creativity, just as how I feel they respect what I'm trying to do with the business," he said.

The A-Team Lifestyle team has several projects under their belts, including the 2019 'Immortal' rhythm, with the likes of Christopher Martin and Masicka adding their special touch to tracks; the 2021 'Clockwork' rhythm; and popular singles such as It's A Party, Living the Dream and Winning is a Must. He has been privileged to have the voice of incarcerated dancehall deejay Vybz Kartel grace previous rhythms, and he returns on the 9.58 with Touch The Sky.

"By now, everybody will know that Vybz has been one of my favourite artistes from high-school days. It's always a good look for me as a young producer," Bolt said about having the proclaimed King of the Dancehall collaborate with him again. There is a good mixture of old and new acts, with IWaata and Ajji also on the tracklist. There is also a special party mix, titled Usain Bolt Presents: 9.58 Riddim, mixed by 2022 World Clash Winner DJ Lank of Code Red. Bolt said, "It's just me presenting an authentic dancehall vibes of project to the fans."