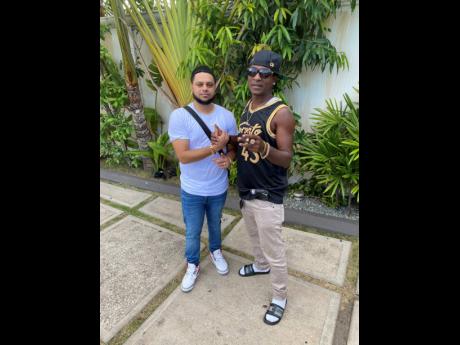 The Balgobin brothers are determined to make their production with Jamaican Billboard-charting dancehall artiste Charly Black the song of the summer.

Based in Guyana, Kevin and Troy Balgobin of Slingerz Records, which is a subsidiary of the prominent Slingerz Sound System, have worked with the Party Animal artiste previously for performances and wanted to work with him to create a fun track that has smooth melodies.

According to Kevin, the song, which is titled Whine For Me, will perform well because of the lyrics and the rhythm, which is a fusion of dancehall and reggaeton.

"This rhythm is geared to both the Latin and Jamaican markets. We were aiming for more of an international type of production, but we still wanted to include dancehall, which is very energetic and infectious and will have you moving the minute the song comes on," Kevin said. Slingerz Records made its debut in 2020 with Teejay's Want Party, which secured one million views on YouTube, and returned in summer 2021 with a Teejay and Jada Kingdom collaboration titled Love Experience that matched the number in streams.

Whine For Me is geared towards the female audience. The track and accompanying video, which was shot in Portland, are slated for release on August 5. The video was edited by Xtreme Arts.

According to Charly Black, he's always writing with the female dancehall fans in mind.

"It always feels good writing songs that compliment the females, their image, and I love their attitude towards my music. It makes me happy to make good music for the females that helps their self-esteem, and I have been writing songs for the females since 2007," he said. "This song is going to live on because it's like my singles One In a Million and You're Perfect, which, both of them, the women really love."