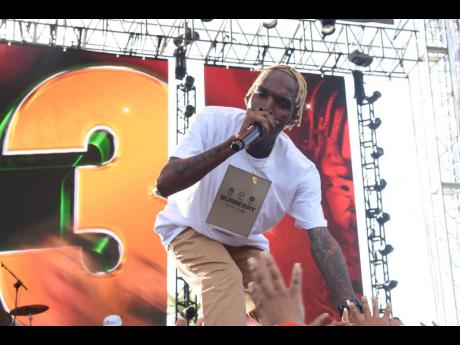 Fast-rising dancehall entertainer Skeng is slated to return to the stage this weekend, having recently taken doctor's orders to rest and recuperate.

According to a press release shared by the organisers of Dream Weekend, the 21-year-old was deemed medically unfit to engage in onstage performances.

Music consultant Cara Vickers, who co-manages Skeng, told THE WEEKEND STAR that the artiste was "really disappointed" to have missed performing for the Dream Weekend audience on the Monday night, but that he was equally concerned about his health.

"Initially he was very worried about not feeling well. Anybody, when they start to feel drained within themselves and they don't know why because it could be anything, it raises an alarm. So of course, he, along with the entire team were relieved to hear it was just dehydration and the doctor also recommended rest and he has rested. Skeng is feeling much better and should be performing on a show in Grenada with Shaneil Muir on Saturday," she said.

Vickers said it has been a very summer for Skeng, plus he has been travelling since the start of the year to the US, UK and across the Caribbean. She said that the travel and overnighting in different locations as well as waking up in different time zones has negatively affected Skeng's sleep. However, she said that he is always on the go to achieve his goals.

"For those who don't know, they just see the result, they don't see the hours and his determination. If Skeng starts something, he has to finish and he records up to four songs in one session [so] for every hit that goes out through public speakers, him dash down three or more songs in one session. I guess it has taken a toll," she said. "It has been hard with back-to-back rehearsals for the shows and he has also been exercising to have proper breathing technique because he is very conscious about what he needs to improve. He knows now that he needs to eat on time and he needs to remember to drink more water even to protect his voice." Vickers said that Skeng doesn't have a schedule per se either as he is very impulsive.

"If he wants to record, he can because there are two in-house studios. He doesn't need to go far to record, but even when he is not well, he still wants to record," she said. The deejay is expected to take September and October to rest and record.

"Skeng is working on an EP and continues to be in talks with international female rapper Nicki Minaj about future collaborations and there are also a few European and British collaborations on the horizon. The team is making sure he is not overworked and does not find himself in a similar position again," Vickers said.