Suga Roy and The Fireball Crew elated with iTunes achievements 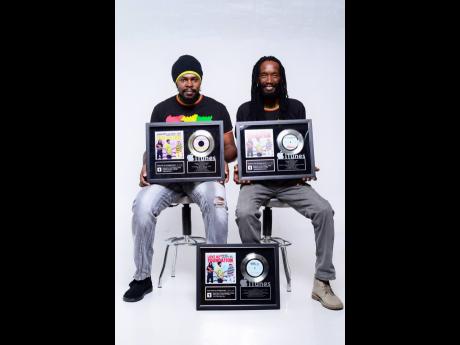 Suga Roy (left) and Conrad Crystal of The Fireball Crew showing off their awards for making it to number one positions in various iTunes reggae charts.

Reggae recording artistes Suga Roy and The Fireball Crew are celebrating awards recently bestowed on them by iTunes.

The artistes have expressed gratitude to their supporters who have lovingly consumed their Love My Foundation album which was released last February.

"We have to say, first and foremost, big up to all our fans and to reggae lovers around the world who are supporting this album. To selectors like DJ Wayne, DJ Bryan, DJ Collision, DJ Amber, Digital Chris, DJ Matrix, DJ Chris Coxsone and DJ Neil, for their undiluted support we are grateful," Suga Roy told THE WEEKEND STAR.

The album, which peaked at number one on the iTunes Reggae album chart, is comprised of 14 tracks. One of them, Nah Go Run made it into the top iTunes US 100 Reggae Songs and, On This Journey, featuring J Boog, was listed on the iTunes Canada Top 100 Reggae Singles.

Suga Roy said there were no doubts among the musicians, artistes and engineers that the album would not attract the international market. With The Fireball Crew, which includes Conrad Crystal and Zareb, noteworthy productions have been produced with several reggae icons, including Inner Circle, hitmakers such as Sizzla, as well as international acts like US rapper Lil' Mo.

"We have always placed a lot of effort on the lyrical content and the quality of the production that we present to the world. It is ensured that the material presented is of the highest quality and standard so, at any given time, from the opportunity presents itself our music will be loved and accepted," Suga Roy said.

With the online entry period for the 65th annual Grammy Awards nearing a close, Suga Roy shared that, though it is eligible, Love My Foundation has not been submitted for consideration.

"Our current plan is the usual, always working on new material," he said. "Specifically, as it relates to the Grammy Awards, we are not focused on that right now. Our main focus on Love My Foundation was to get it known by all globally," he said.