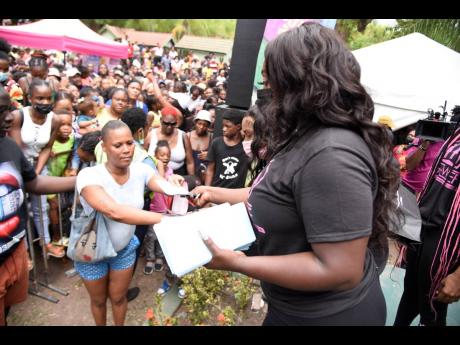 Spice hands out vouchers to aid with back-to-school expenses. 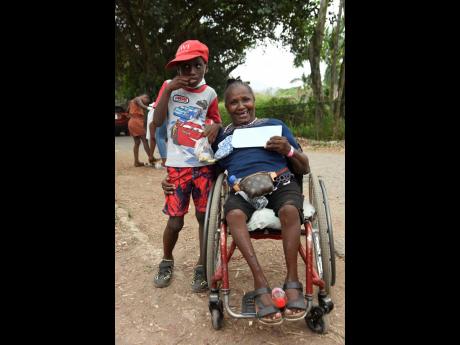 Vinnette Green shows off the envelope she received for her grandson, Justin Brooks, at Spice’s back-to-school giveaway last Friday.
1
2

The two-year hiatus caused by the pandemic gave Spice the opportunity to go back to the drawing board and strategise ways to successfully execute her back-to-school outreach initiative. In order to have better crowd control following the chaos of 2019, she upgraded to a bigger venue, implemented security barriers, attempted to enforce armbands, received permits and enlisted the assistance from the Jamaica Constabulary Force.

But even that was not enough last Friday as fans flocked to the Hope Gardens in droves. The moment formalities were over, they pushed their way to the front to get their hands on an envelope. Spice found herself, on several occasions, pleading with attendees to maintain order, assuring that every mother would receive assistance. This promise, however, did not stop the force from bearing down towards the stage. The Black Hypocrisy singer had no choice but to retreat and subsequently exit the location.

"Any mother who is here, you are here for a reason," Spice told the crowd, but the uncontrollable audience sent the recording artiste packing, leaving the venue earlier than anticipated.

She took to social media soon after, asking her followers if they could suggest other ways she could give back to the mothers and children in need, since she, along with members of her foundation, still have envelopes.

"People were [still] pushing and causing chaos to come to the front or to get an envelope first. Believe me when I say this, I'm still not mad at you. I completely understand that there's truly mothers out there that are desperate and in need of assistance. Please forgive me if you didn't get one," she shared on an Instagram post.

Mothers, with children in hand, made their way to the Shell Band Stand, beside the Hope Zoo, to meet 'Auntie Grace' and receive gifts. Scheduled to begin at 1 p.m., Spice, given name Grace Hamilton, emerged on stage two hours later, apologising for the late start.

On the eve of her birthday, Hamilton greeted the attentive spectators in song. She was joined by members of the Grace Hamilton Women Empowerment Foundation, as well as her children, Nicholas and Nicholatoy.