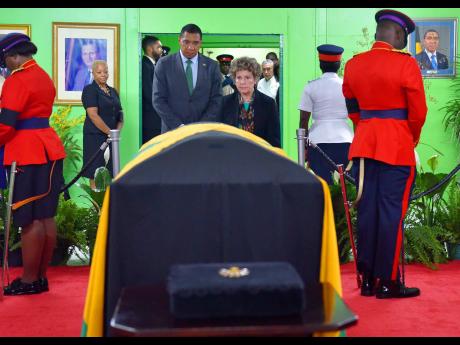 McKenzie was speaking in Tivoli Gardens square on Wednesday night where a staggering number of Labourites sang and danced, Pocomania style, at Seaga's nine-night.

“I hear a lot of argument going around that you will not get a chance to look at him (Seaga). But the wishes of Edward Philip George Seaga must be honoured. He said that he wanted the people of West Kingston to remember him as he was in life," McKenzie said.

Seaga passed away on his 89th birthday at a hospital in the United States last week. The Government has outlined a raft of activities leading up to his funeral on June 23. Several viewings have been scheduled, but persons will not be able to see Seaga's body as the casket will remain closed, however, the so-called closed-casket viewing has been the source of much talk and speculation in the society.

But McKenzie, speaking to Labourites on Wednesday night, said: "Don’t follow any fool-fool argument. We will honour his wishes and that of his family.”

In the meantime, Jamaica Labour Party Leader, Prime Minister Andrew Holness, spoke of the Edward who puzzled him because he always had a handkerchief sticking out of his back pocket.

“Cause him a bad man,” a vocal member of the thick crowd shouted.

Holness emphasised that Seaga was very big on image and mentioned his love for dark glasses.

“He carried a public image. He was very well put together, but above all, he was someone who cared for the people. People want to see Mr Seaga in death. He would want you to remember him in life,” Holness said. 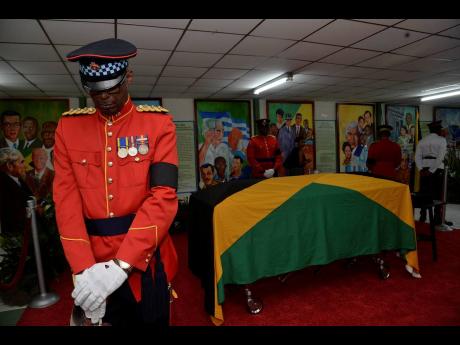 Seaga's body will lie in state at the Montego Bay Cultural Centre in Sam Sharpe Square from 9 a.m. to noon, before being moved to the St John’s Anglican Church in Ocho Rios, St Ann, from 2 p.m. to 5 p.m. And next Monday, June 10, Seaga’s body will lie in state at the Tivoli Gardens Community Centre in Kingston from 10 a.m. to 1 p.m. On Tuesday, June 11, his body will be at the Denham Town Community Centre, from 10 a.m. to 1 p.m.

There will be a celebration of the arts in tribute to Seaga at the Little Theatre in Kingston, featuring the National Dance Theatre Company and the Tivoli Dance Troupe, on June 18.

The Government has announced a four-day period of mourning from June 19 to 22, leading up to the June 23 funeral for the nation’s fifth prime minister.