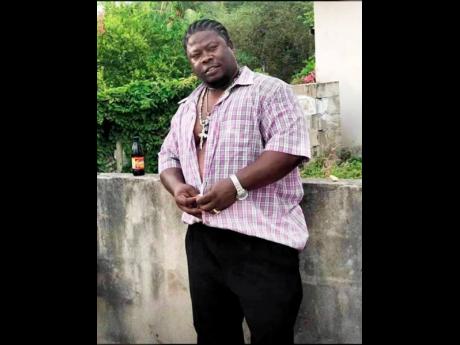 A private security officer was killed yesterday after leaving church where he had gone to pray.

Jermaine Duffus, 42, who was employed by Woody's Food Court in Portmore, was shot and killed by unknown assailants on Caymanas Drive at 1:45 p.m. Reports are that four men approached Duffus' white Toyota Corolla motor car, deflated the tyres, and and then shot him multiple times in the upper body. He was pronounced dead at hospital. Duffus' mother, 79-year-old Catherine Duffus, a devout Christian, was distraught.

"I led fasting service at my church on Monday morning, and the Lord put St John 14, ( Let not your heart be troubled, you believe in God believe also in Me) in my spirit. I didn't know that he was comforting me for what eventually happened later," she said. "It was after I left church and came home. One of my church sisters who heard the news before me called and said 'Sister Catherine, God comforted you before the tragedy'."

Duffus, a mother of nine, said she enquired what had happened, and she was told that 'Jer' as her son was affectionately called, had been shot.

"I am in pain but the Lord has comforted me because he knows I am not well. Jermaine is my second to last child. I have nine children and now two have gone, also my husband," Duffus said.

The slain guard's younger sister said her brother, who had given his life to Christ, was on his way to a family grave digging in the country, and had stopped to pray before he started out on his journey. Meanwhile councillor for the Independence City division, Courtney Edwards, acknowledged that there have been three murders in the division "in recent times".

"We are planning to install closed-circuit television cameras in the area to monitor certain thoroughfare," he said. "So yes we will be putting in these cameras and feed them to JamaicaEye."