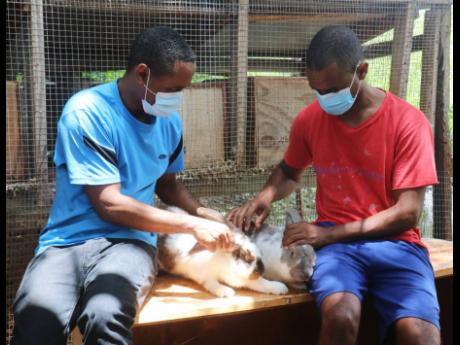 The Nemhard brothers, Stevon (left) and Damien, say that persons who go into rabbit rearing should be prepared to dedicate time to the venture. 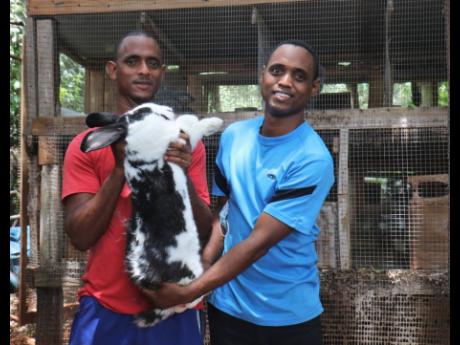 Damien (left) and Stevon Nembhard with one of their giant rabbits on their farm in St Elizabeth.
1
2

Chocolate brown, cinnamon, black, chequered and blue are some of the shades of giant rabbits that brothers Damien and Stevon Nembhard have at their home in St Elizabeth. The furry creatures weigh up to 17 pounds when fully grown, and the brothers hope to showcase them in a national competition someday.

The Nembhards, though, are not raising these giant rabbits for show. They actually have a business, Jamaican Giant Rabbits, through which they have been selling these animals since being established seven years ago when they decided to transform their love for rabbits into an income-earner.

"A friend of mine gave me a buck giant rabbit and we got a doe to mate with it," Damien said. Their giant rabbit population has grown ever since. The current habitat can hold 120 rabbits, with space for 72 of the giant breeds.

"Our aim was to have a variation of giant rabbits, which was unknown to Jamaicans. We wanted to introduce it not only for recreational purposes, but as a profit-making venture," Damien told THE WEEKEND STAR.

Rabbits are mainly sold as pets in Jamaica, with the consumption of the meat being very low. Does will drop litters of between two and 10 kittens, with a breeding cycle of about three months, or four cycles for a year.

"If you put out a rabbit now, by the end of a month it will give you as many as 10 or more rabbits. This rabbit can do that for maybe four or five times for the year, based on how you breed them," Damien said.

The start-up cost for rabbit rearing is regarded as low, but the Nembhard brothers caution that persons should be prepared to give them attention.

"All you need is a freezer space or to build a pen that is self-cleaning with mesh so the filth can fall out easily," Damien said.

The demand for rabbit meat is not great here in Jamaica, but the brothers say there have been expressions of interest from hoteliers on the island.

"We may tap into selling to the Spanish hotels here in Jamaica in the future. Now, we are focusing on our special line where the meat quality of the giant, you have more meat between the bones. The bigger they are, the chunkier the meat is. We want to bring that to the meat market so you can have boneless rabbit meat, and that I know will take off big time," Damien said.