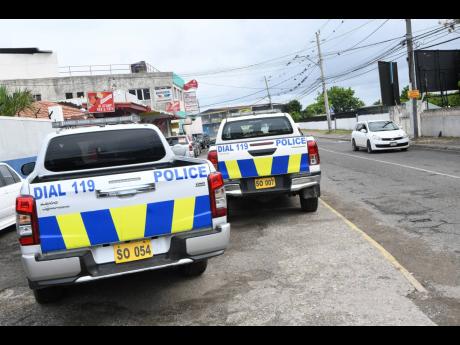 Park Lane, located off Red Hills Road in Kingston, was the scene of a major shooting incident on Saturday. Seven persons were shot, three of them fatally.

Just over a year after surviving a gun attack while working at a gas station on Red Hills Road in St Andrew, Park Lane resident Kemonie White was again the target of gangsters. This time around, however, he was not as lucky. The 29-year-old was among three persons murdered in the gritty community on Saturday. His cousin, Rushane White, and Alex Henry -- both 27 years old -- were the other victims.

A relative of the Whites told THE STAR that they are struggling to come to grips with the untimely death of the young men. In the case of Kemonie, the relative said that he was just recovering from last year's shooting incident.

"God save him inna 2020, 'cause him never dead and him come through it [and was] trying to put back his life together," the relative said.

Seven persons were shot in Saturday's incident, which is believed to be linked to a daring abduction of a man from the community about 3 p.m. the same day.

"Men came into the community reporting to be the police from St Andrew North and took him from the community. They thought it was the police and called to confirm but they were told it was not. A missing person report was filed and the police are investigating the incident," said Senior Superintendent of Police Stephanie Lindsay.

Shortly after, about 7:30 p.m., all hell broke loose on Park Lane. According to police reports, a group of men was along the main road when they were approached by another group of men who were armed with firearms. The men opened fire at the men who attempted to escape. After the shooting subsided, three of the men were fatally shot and four were injured.

The relative of the Whites told THE STAR that Kemonie was outside his gate at the time of the attack, while Rushane was in the yard.

"Dem did deh right out deh so just talking, dem and dem friend and all of a sudden, dem hear this whole heap a shot a fire. Him (Kemonie) run and him dead down the road. The other one (Rushane) did deh right here a trim a next guy hair, and him get shot and him run and drop in the kitchen. A deh suh him dead," the relative said.

The police have not yet determined whether the shootings are linked to the abduction of the businessman. Law enforcement personnel told THE STAR that the incident could be due to an internal gang feud. Several residents have reportedly fled their homes.

A shop owner within the community said the violence has impacted sales, making it difficult to generate a profit.

"Not even a bag juice me can sell the way how it bad. It wicked, it just emotional right now," the businessman said.

Another resident said that it is important for the security forces to maintain a strong presence in the area.

"We don't feel safe, it nuh safe. In here tense and we woulda like fi see them come in regular, and patrol the space. Me really nuh know wah fi expect next. It's really bad," the resident said.