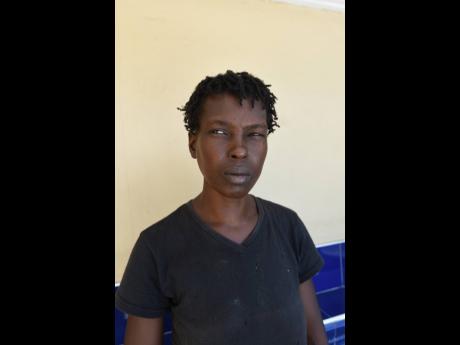 "Mi just cyah be homeless nuh more!" These are the heartbreaking words of Karen Creary, who said that she has spent the last two years sleeping on doorsteps in downtown Kingston.

The 42-year-old mother of six said her homelessness is the result of a series of unfortunate events, which includes the collapse of the roof of her home Jones Town, St Andrew, while she and her children were inside in 2010.

"One day the three a we in there and the house top fall apart. It cave in pon we," she said. "Me hold up piece a the board and make the two likkle one dem come out and then me let it go."

Creary says she and the three youngest of her children, ages 20, 12 and 11 had no choice but to live in the derelict building after their previous dwelling in downtown Kingston was burnt to the ground two years earlier.

She told THE STAR after the house collapsed, her chidren have been living with her mother at her Tenth Street address, while she stayed with her sister on Lyndhurst Road. However, after the death of her sister in 2019, Creary found herself homeless. She said that she had no choice but to sleep on steps and benches in the Corporate Area.

Creary's mother, Hulda Creary told THE STAR that she is unable to care for both her grandchildren and her daughter. "Me nuh have nuh accommodation fi all of dem," she said. "Me have pressure and arthritis and a me one, cause the pikney dem father don't stand up like a man."

"She been going through a very rough time," the elder Creary said. "A whole heap a things she go through man. Is a very rough."

She said that her daughter sometimes sells bag juice and other goods to try and contribute to the household. "She sell, enuh, but anuh all the while and sometimes it suh likkle bit me can't even ask her fi anything cause it cyah share."

"I'm asking anyone who can assist her, please me a beg yuh," the grandmother said. "When the house tear down she didn't even have real bed, so I'd be very very thankful if anyone can help her."

Creary's 20-year-old daughter, Axsana, told THE STAR that her hope for her mother is that she gets a job and a house in which to live so that she can take care of herself.