George Nooks talks ‘Through it All’ 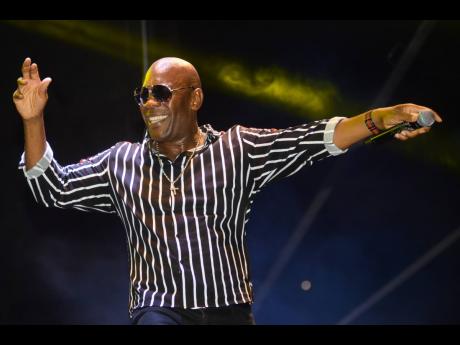 The expression 'he who feels it knows it' never felt more real for reggae singer George Nooks than when he heard the song Through it All for the very first time.

"That was many, many years ago, and I knew that one day I would have to do a cover of that song. And it was like it was ordained, because I forgot all about it, and then when I was doing this album for Tads [producer] he asked if I would do Through it All. I said, 'My gosh, is a long time I wanted to do that song!' The lyrics touched me then and dem still have that impact today," Nooks said of the Andrae Crouch hit.

The single, which is the title track from his soon-to-be-released gospel album, is Nooks' panacea for these troubling, pandemic times.

He says that he is looking beyond his own personal issues and focusing instead on sharing a message of hope to those who are consumed by fear of the global predictions of gloom and doom.

"Now that we are going through this rough and negative time, I will continue to stick to my beliefs and I am encouraging others to do the same. I born come hear my grandmother saying that 'God a God', and that will never change. He is still in charge, he wakes us up each morning, even though we might try to fool ourselves that we did it all by ourselves. I know from experience that no matter how rough it gets, God is standing by and he will always help us through it all," the Ride Out Your Storm singer declared.

Having made his name in the secular world as both a singer and a deejay, Nooks dropped his first gospel tune, God is Standing By, in 2000 and has since enjoyed an almost Midas touch with a slew of inspirational tunes in the ensuing years. This led to gospel albums, an overall increase in his fan base and a demand for gospel shows, despite him not advertising himself as a gospel artiste.

"I enjoy all kinds of music and these inspirational songs are close to my heart. Working on this album was special, maybe because the world has never experienced a time such as this in living memory and so everything that we do have a different kind of impact. I was baptised at an early age and I have since made my recommitment to God," Nooks shared.

And, does he have any plans for re-baptism? "Who knows?" he answered.

Through it All is scheduled for release in October. Listed among the tracks are Amazing Grace, Only Believe, I Surrender and Just in Time.