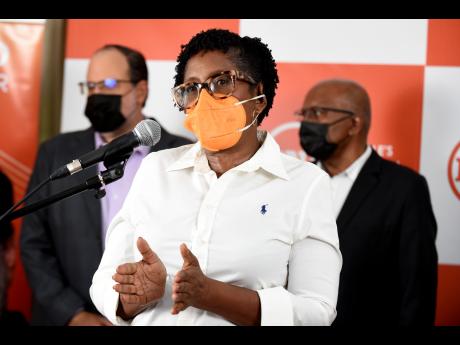 The Peoples National Party (PNP) Shadow Minister of Education and Training, Dr. Angela Brown-Burke, is insisting that all public schools be reopened.

In a statement to the media, Brown-Burke suggested a variety of methods for reopening schools, which include dividing classes into smaller groups so that every student can attend in-person classes for at least one day per week.

Brown-Burke is of the belief that every Jamaican should be concerned about the growing inequality amongst children, as too many of them remain out of school without any access to structured education.

“Despite the mismanagement of the Pfizer vaccine distribution, our children’s education cannot continue to be placed on hold. A generation of children is at risk of irreversible learning loss, malnutrition and poor mental health outcomes,” she said.

She also suggested that the education minister appoints social workers and additional guidance counsellors to ensure that the psycho-social needs of children are met.

In addition, the opposition spokesperson has demanded that all arrangements for the re-opening of schools begin no later than next week and that the following steps be taken immediately:

-  Development of a coordinated approach by the Ministries of Education, Transport and Works and Health for a transportation plan to minimise crowding and exposure for students using public transportation.

- Utilise the plans developed over a year ago, by school administrations, MOEYI and Ministry of Health officials which determined the maximum capacity of each classroom while observing physical distancing guidelines.

- Enforce strict adherence to covid protocols such as mask-wearing, hand washing and sanitising.

- Ensure that parents/guardians are aware of and satisfied with the arrangements.

- Parents/guardians should be given the option of having students participate in online classes, only if they have underlying conditions. Parents should agree to keep children at home if they feel sick or are showing any of the listed symptoms of Covid-19.

In the meantime, Dr. Brown Burke has expressed concern with the lack of technological infrastructure available in some communities, which she says has caused major hindrance to participation in school.

She has recommended that principals consider allowing groups of students during specified hours to use school facilities to complete their work, while noting that this arrangement would have to be carefully managed by schools.