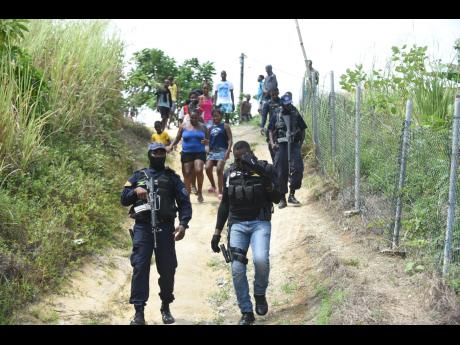 Police and residents search for a suspected abductor in St.Thomas.

The police are urging residents of St Thomas to desist from carrying out any form of mob killing, as it is a criminal offence for which they can be arrested and charged.

The warning comes following the stabbing death of an unidentified man in Llandewey district in the parish this morning.

Police reports are that about 7:30 a.m., residents saw the man in a section of the community, attacked and beat him.

The police were summoned and on their arrival, the man was taken to hospital where he was pronounced dead.

Detectives theorised that the residents believed the man was Davian Bryan, the man suspected of abducting two girls in the parish last week.

“If and when you see the suspect, contact the police. It serves no one’s interest for persons to take justice in their own hands,” said Superintendent Allison Byfield.

Meanwhile, a reward of JMD 200,000 is being offered through Crime Stop Jamaica, to anyone who can offer information that will lead to the arrest of Davian Bryan.

Persons with information are being asked to contact Crime Stop at 311.