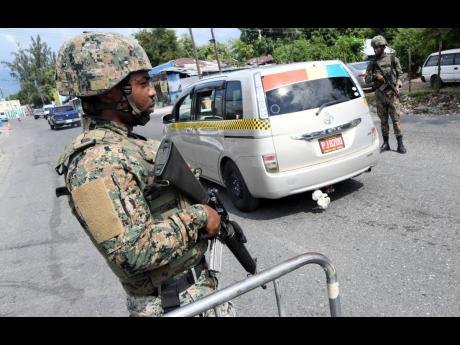 Members of the security forces carry out checks at a state of public emergency checkpoint on Maxfield Avenue in St Andrew.

President of the Senate, Tom Tavares Finson, said the parliamentary opposition, particularly the three senators who voted against the state of emergency (SOE), have "put this country is grave danger".

Peter Bunting, Lambert Brown and Floyd Morris voted against two resolutions that we brought to the Senate seeking the extension of the SOEs.

All 13 government senators voted for the measure, but under the constitution, at least one opposition senator was needed for the SOEs to continue. Five opposition senators were absent for the vote, but they had foreshadowed in the lengthy debate that they would not support the extension of the advanced security measures.

Bunting, a former national security minister, like other opposition senators who spoke in the debate, noted that there has been an 11 per cent increase in murders this year. He said, however, that an SOE was not the answer. He said that murders have increased but arrests have fallen by 11 per cent and the clear-up rate has also declined.

"There has been a breakdown in the intelligence gathering, in the investigations and in the case preparations. These are not things that will be solved by the declaration of a state of emergency," Bunting said.

"Three unelected members of this Senate have put the security of this nation on a knife's edge...None of them have anything to do with the parishes and the divisions where crime is making our citizen's lives a nightmare... This country needs to revisit this provision because it flies in the face of everything that is sensible," Tavares Finson said.

Government Senator Matthew Samuda, minister without portfolio in the ministry of national security who piloted the resolutions, said that he had sensed a "pre-determined wilful ignorance" and accused the opposition of playing politics.

"If you are going to play politics, I suggest that you at least play it well," Samuda said. He said the position taken by the opposition shows that they have chosen "politics over the lives of Jamaicans".

During the debate, Samuda said that since the imposition of SOEs in the seven police divisions on November 14, there has been a 19 per cent decline in the weekly murder count islandwide.

"Combined, the seven police divisions under states of emergency experienced a 28 per cent decline in weekly murders," he added.