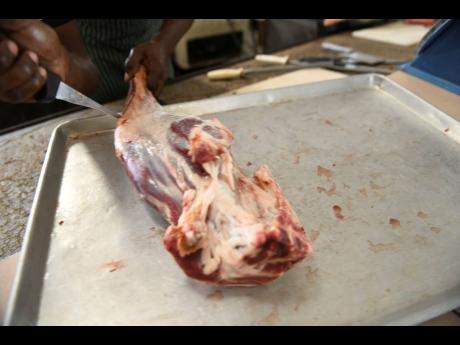 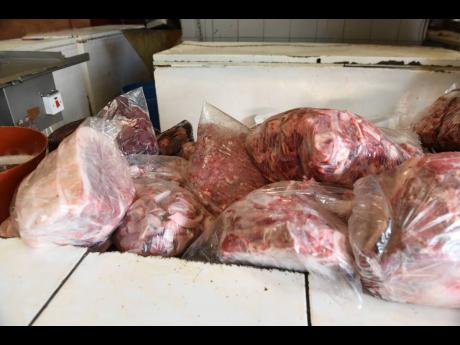 In spite of price increases, meat cutters in the Cross Roads Market say they are still hopeful for many Christmas customers.

Owner and operator of Lloyd Weise & Sons Meat Mart, Lloyd Weise, says while meat sales for the year have been less than ideal, he knows that meat for Christmas dinner is a must, and he is ready to meet that demand.

"People a guh come man, people a guh come buy meat. You don't eat meat the whole year but you gonna eat a piece a meat, so people ago come in, right boss?" he said gesturing to a customer. Weise, who has been in the meat vending industry for over 30 years, says this is the busiest season for meat cutters and the demand for goat meat and pork is often overwhelming.

"Usually, me cyah even answer me phone dem time yah. And when me do answer a just fi tell people link me back January," he told THE STAR. But Weise reasoned that this year, the increase in prices of meat, pork and oxtail have caused abysmal sales.

"You see the price, it make dem [customers] roll back. You see a man weh woulda like fi buy 10 pound, him cyah buy more than all five. So the price kinda a have a impact pon di customer dem," he said.

Weise said praedial larceny plays a major role in the increase in prices as many are discouraged from raising animals for fear of being robbed before they have a chance to earn.

"Say for instance, your grandmother a raise her likkle goat dem. She have dem and seh she a keep har goat dem fi sell a Christmas and when she wake up fi sell them now, them gone. She nah guh have nuh encouragement seh she ago raise nuh more goat. So that is a part of it deh so, you lose that market," he said.

According to Weise, local goat meat, which would have sold for about $700 to $800 a pound earlier in the year, is now going for $1,000 and is likely to increase again before the end of the year. He said the ram goat meat may fetch as high as $1,500.

"Probably an increase [in customers] might gwaan but we doah see it come in yet. Hopefully [it comes] cah remember a whole heap a people nuh really have nuh job. Them nuh really have no money fi spend like one time. So we will see wah gwaan," he said.

Weise also said that the many lockdowns of 2021 and the need for people to keep their houses stocked with food while they were home may have also affected sales.