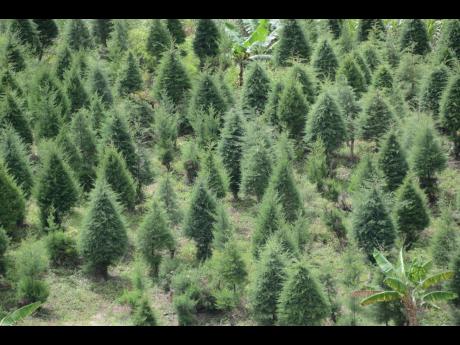 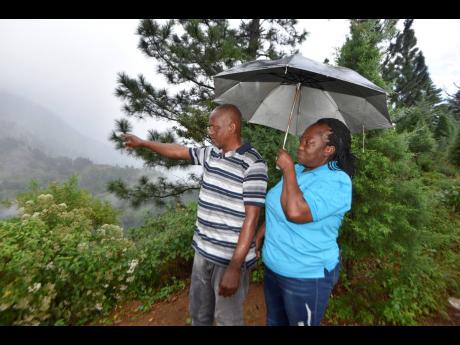 The Watsons show the news team a section of their Christmas tree farm in Penlyne Castle, St Thomas. 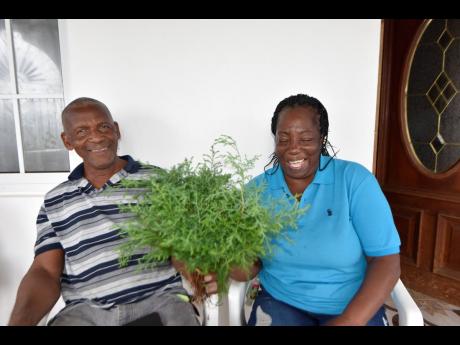 Louise and Rudolf Watson sharing one of their many laughs while holding a modern tannenbaum (Christmas tree) sucker.
1
2
3

'Tis not only the season of Yuletide joy but also a time where families come together and love flourishes.

For Louise and Rudolf Watson, this is the most wonderful time of the year for both their business and their family. The Watsons are the owners and operators of Watson's Christmas Tree Farm, located in the hills of Penlyne Castle, St Thomas. They have been married for almost 20 years and say that cultivating Christmas joy through trees is a beautiful way to make a living. But doing it together makes it all the more special.

"We have a good bond, a very good bond. Sometime I think we chat too much," Louise told THE WEEKEND STAR. "You know we spend a lot of time together, sometime I say, 'God, please don't let us die together'. Everything that we do, we do it together. If I want a pair of shoes, both of us [go to get it]. If I need a dress, he has to go with me."

She says that, regardless of the countless hours spent together, they are just as in love as they were when they got married.

"When your children can look at you and say 'I want to be like Mom and Dad', it's very good," she said. Their business venture started as a solo operation over 25 years ago when Rudolf discovered how lucrative this market could be.

"I used to transport people [who grew trees] and charge them to go down [to be sold]. But when I check it out, I see that I have to wait on them to be paid and I am on the spot. I decided that I'm going to start to sell the trees too, which was more profitable for me. So that's how I started," Rudolf reminisced.

According to Louise, her husband tried to get her into the business for years.

"I was never interested until one year I decided that I would be going to Constant Spring with him and, when I went there, it was so interesting. I liked it so from then, you know, I just continue," she said. "I love it so much that I don't want to miss out. I make sure if Mr Watson is out to do delivery, I'm here to cut the trees so that, when he gets back, he can get them to take back to Kingston."

Fully mature trees take up to four years to grow and some have risen to as high as 12 feet.

Now the Watsons, who grow Christmas trees on nearly two acres of land in addition to the small farm they have at their house, have included one of their sons in the business. He accompanies them on deliveries and sometimes sells the trees in Half-Way Tree when they are not around.

Louise says, this season, they have sold over 100 trees so far and estimates that number will be doubled by the end of the holidays.

"I believe we can do 200 because we're getting a lot of orders now and we still go down to Constant Spring [Road] to sell," she said.

"We'll get new customers and, when they find out about us, they always want us to deliver to them," Rudolf added. The Watsons say that they have enjoyed spreading the Christmas spirit in part because their business carries them to various parts of the island. They have customers as far away as Montego Bay.

They hope that the business will remain in the family, with one of their three children taking over.

Louise said "I would really like to make it a family tradition, I was thinking about it yesterday. I wonder who is gonna take over after us but we don't know yet and probably will never know."