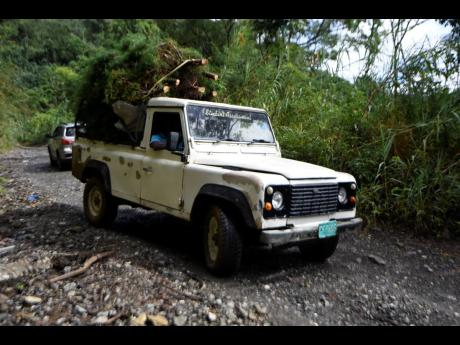 A jeep transporting Christmas trees slowly makes its way along a section of the Mount Charles main road. 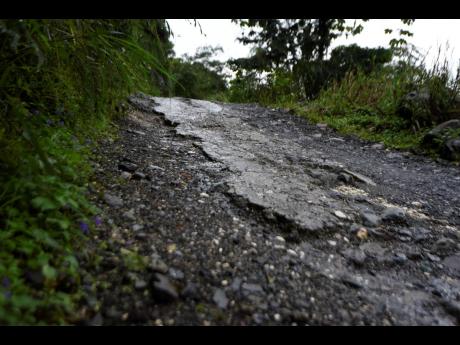 Believe it or not, this is a section of the Mount Charles main road in St Andrew. The road is used by persons heading to areas such as Hagley Gap, Epping Farm and Penlyne Castle. 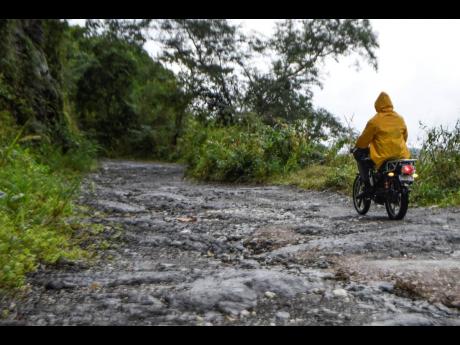 A motorist makes his way along the bad roads. 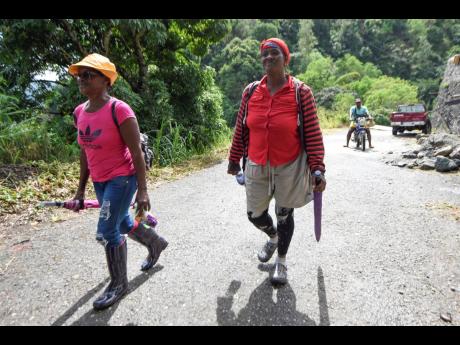 Patrica Carr (left) and Jasmine Taylor, farmers, had to walk the substandard road from Hagley Gap to Penlyne Castle in St Thomas. This area is among the few with visible layer of asphalt. 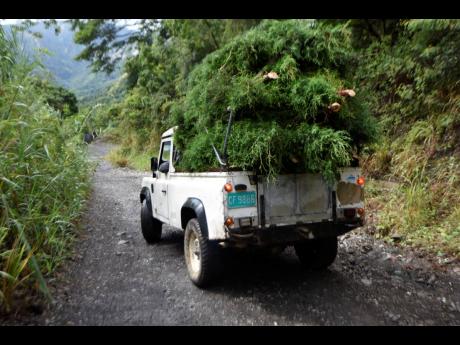 Christmas trees being transported from the St Thomas hills to market in Kingston.
1
2
3
4
5

Farmers in the Blue Mountain range in St Thomas have consistently laboured long and hard to not only produce the world famous Blue Mountain coffee but also supply Jamaicans with Christmas favourites such as pine trees that emit piney aroma, and the widely sought-after condiments such as scallion or thyme.

But in spite of the immeasurable impact these farmers of Hagley Gap, Epping Farm and Penlyne Castle have on the Christmas season in Jamaica, the conditions under which they are forced to get their produce to market is far from merry.

In order to get to Constant Spring Road, where they often sell their Christmas trees, or Coronation Market, where their ground provisions are sold, these farmers have to endure roads that can be mistaken for hiking trails. Getting to the farms or the homes of these farmers is almost like doing a day's work on a construction site. From jagged rocks and steep mountainous ridges to potholes that are wide and deep, the terrain is more than just an inconvenience to those that have to traverse it.

"The experience with the bad roads up here is very, very bad. Sometimes you have to walk to take the bike taxi or sometime you have to call and they come and pick up," said Patricia Carr, a coffee farmer from Epping Farm.

Jasmine Taylor, another farmer in the area, said that coming up with the fare for the bike taxis can be a challenge.

While these fare sound exorbitant, Jerry Williams, a bike taxi operator, said that the fare takes into account factors such as the road conditions and the expertise that is required to navigate the terrain.

"More while the bike liff up offa di road, you affi take off the people offa it weh yah bring up and mek dem walk over the hill. More while yah guh dung, like how the rain fall now, you wi slide weh. Yuh affi know how fi guh dung. So you cyah guh dung inah low gear, yuh affi go dung inah like third and make it chip offa it own," Williams said.

The dangerous and difficult roadway is easily navigated by four-wheel drive or other vehicles meant for off-roading. Some members of these communities have resigned to not travelling to other places in an effort to escape the costs associated with travel.

Winnie Gilroy, who now gets her main income from a shop she operates in Farm Hill, said that she used to travel to sell her produce in the Coronation Market. However, the conditions of the road contributed to her deciding to call curtains on her market career.

"Mi farm everything, coffee, escallion, everything ... I used to go Coronation Market but the expense fi go the market it very hard so we have higgler round here. Mi just sell to dem higgler my produce now. Mi a get ageable and when we drive pon the road, by time you reach a market you drop a sleep before you even start sell the load. We a one good good slave, that coming like one slave ting cause we nah nuh good road on a whole," Gilroy said.

"No matter the amount a voice weh we give out, we nah get nuh road. So we affi just live. We wah the road, enuh, because right now me woulda eat piece a KFC. Inna 20 minute me wouda reach a Liguanea and come back like me nuh guh nuh weh, if mi did have good road," she added.

The woman estimated that given the road conditions, it would take her about two and a half hours to travel to Liguanea, via Mavis Bank, in order to treat herself to some KFC.

"By di time mi come back, night a guh come," she said.

Contacted for comment, James Robertson, the member of parliament for St Thomas West, said he knows the inconvenience being faced by residents.

"I understand the suffering of the people, nobody rides their motorbike or drives their vehicle on those roads more than I do. So I am fully aware of the conditions," the MP said.

Robertson said that a temporary fix solution is on the table.