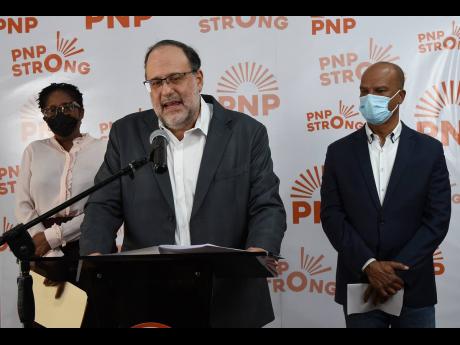 Opposition Leader and President of the People’s National Party (PNP) Mark Golding (centre) addresses the media during a press conference yesterday. He is flanked by PNP Chairman and spokesperson on education Angela Brown Burke (left) and spokesperson on national security Peter Bunting.

Leader of the Opposition Mark Golding has criticised the new Cabinet organised by Prime Minister Andrew Holness, saying it was a fairly trivial exercise.

Holness announced on Monday the long-promised reshuffling of his Cabinet. The major changes include the reappointment of Floyd Green. He is now a minister without portfolio in the Office of the Prime Minister. Robert Montague was also moved from the transport ministry, and is now a minister without portfolio in the Ministry of Economic Growth and Job Creation. Former attorney general Marlene Malahoo-Forte was also named minister of the newly created Ministry of Legal and Constitutional Affairs. The new attorney general is Dr Derrick McKoy. Under-fire national security minister Dr Horace Chang retains that portfolio. Among Golding's concerns was the splitting of the justice minister's responsibilities.

"Minster [Delroy] Chuck [justice minister] will be twiddling his thumbs, no longer responsible for managing the legislative work of the Government while the chief justice and the court management services manage the court system. It really looks like more jobs for the boys at the expense of the taxpayer," said Golding. "We have a new attorney general. Glory be. But this new attorney general will not sit in Parliament and so he cannot be held accountable to the Jamaican people even though he is a political appointee who advises the Cabinet on matters that do come to Parliament. This is an unacceptable arrangement, although technically permissible."

Golding claimed that the Government cannot be trusted with any additional powers as they have been a "serial violator of the Constitution".

"The attorney general must be brought into Parliament so he can answer to the representatives of the people," he stressed. Golding also criticised the Office of the Prime Minister and the Ministry of Economic Growth and Job Creation, which also incorporates portfolios such as housing and climate change, as a super ministry.

"[It is] comprising the prime minister himself and six ministers without portfolio with no clear structure or mandate. It used to be the place to house geriatric politicians who refuse to go home. It is now the naughty corner, to park ministers who disgrace the Government," Golding said.