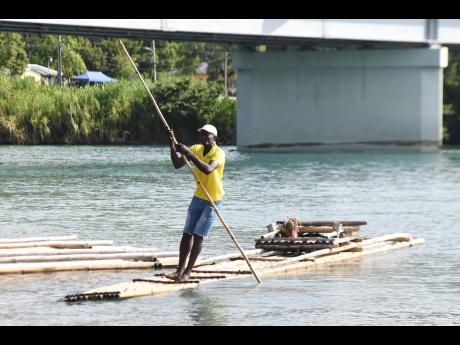 Donald Richards manoeuvres his raft on the Rio Grande in Portland.

After almost two years of hardship, raft captains on the Rio Grande benefited from a small increase in customers during the holiday period.

President of the Rio Grande Raft Captains Association, Lawrence Chisholm, told THE STAR that during the Christmas and New Year holidays, he and his contemporaries saw the most business in months.

"The business never really a flow, enuh, but chu it come on to the holiday now, we have a one week a flow with very good business. From the 26th a December come down, very good business," he said. "Every year a so it work out. After the Christmas, we always have a likkle flow. So after that run off back, everything sekkle back again."

In early December, Prime Minister Andrew Holness announced a relaxation of the COVID-19 restrictions on rivers and beaches, allowing them to be open until 5 p.m. daily, one hour later than the previous 4 p.m. curfew for such attractions.

But Chisholm said that while he is grateful for the business they got during the holiday, he is fearful that things will dry up again.

"From we come back, we a see like it out fi drop back. I only hope it nuh reach where it did deh before, especially like how them say the fourth wave a come in yah now," he said.

One factor that may be contributing to the lack of patrons is the Omicron strain of the coronavirus and the 'bad flu' that the country has been hit with. Chisholm says a few captains, including himself, fell ill just after their influx of customers, but have since recovered and are ready to work.

"It did lick me dung fi 'bout a week, but me come back good now. Some other man did have it a likkle way, too, but nothing serious weh dem cyah work," he said.