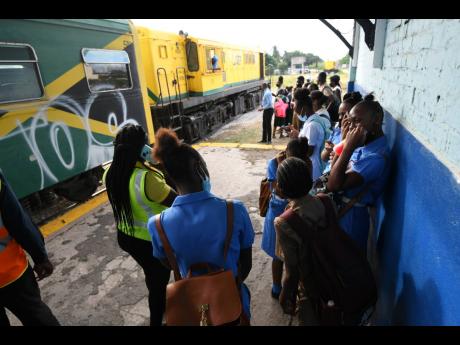 Students waiting to board the evening train in Spanish Town as they head home on day one of the service on Monday.

General Manager at the Jamaica Railway Corporation (JRC) Donald Hanson says he has high hopes for the school train for the rest of this week.

The long-awaited train service that transports students to Spanish Town from Old Harbour and Linstead became operational on Monday with a very small turnout.

"The first morning it wasn't so good but it's picking up now. It's a good sign when we carry over a 160, 170, so it's picking up," he said. While the turnout for the first day was low, Hanson says his officials reported an increase in passengers on Tuesday.

"This afternoon we got like 90 [students] going to Old Harbour and like 70-something going to Linstead so it's picking up. They [the students] are actually collecting their cards and started to use them. Tomorrow morning, we should have a better uptake," he said. The School Train Service is a partnership of the Ministry of Transport and Mining; the Ministry of Education and Youth; the JRC; the Jamaica Urban Transit Company (JUTC), and the Jamaica Constabulary Force.

The students are transported by train to Spanish Town where JUTC buses then carry them to their respective schools. The students from the initial six participating schools are issued cards to use with the cashless system. Hanson surmised that the numbers have been low as many of the students have not picked up their cards.

While Hanson says that the target is 200 passengers for each trip, he is hopeful to see a repeat of the 160 passengers that travelled on Tuesday afternoon.

"We're gonna watch it and see how it goes but we not gonna stop until we get all of them out," he said.