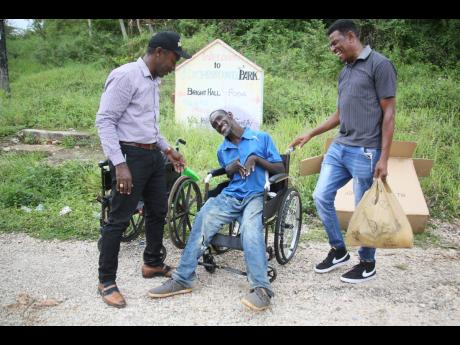 Devon Reid (centre) excitedly shows off his new wheelchair, fresh out the box. Looking on are Pastor Tilden Falconer (left) and Clement Alves. 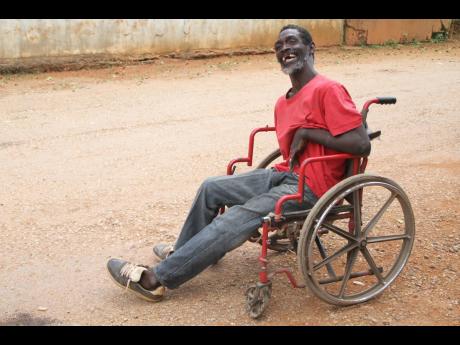 Reid in his old wheelchair last month. He now has a more modern chair to help him get around his community.
1
2

Almost one month after physically challenged Mocho resident Devon Reid's story was published in THE STAR, he was all smiles on Saturday as he sat in his brand new wheelchair courtesy of Robert Nesta Morgan, member of parliament for North East Clarendon.

Morgan had reached out to Tankweld Metals, which provided the chair for Reid, 44, whose previous chair had long outlived its use. He had to use his feet to propel the chair forward. When THE STAR visited Reid, known as 'Marrow' in his Richmond Park community, he could hardly contain his glee as his wheelchair was taken out of its box. Contorting his lips, he struggled before finally getting out the words, "Tank you very much for the wheelchair; a feel good, so give tanks unto the Most High God."

Pastor Tilden Falconer, who also brought Reid's monthly supply of groceries along with the chair, informed that the disabled resident has had other chairs but the rugged terrain between his home and the shop where he hangs out contributes to the rapid wear and tear of the chair.

"This one can be pumped and it is able to manage the terrain of the road much better. Each time the tyre goes down, he can pump it and have it repaired," Falconer explained.

Although the chair eases Reid's burden, he still has the discomfort of having no running water at his home. Falconer said that it is something that is being looked into with the possibility of getting him a tank, if the water is not connected. Falconer, who pastors a church in Scotts Pass, shared that it is the fourth wheelchair he has donated in conjunction with Morgan.

Reid, though full of gratitude for his chair, used the opportunity to voice another request

"I feel so good and tanks but mi waan sitten else yah now. I need some money fi carry cause sometimes mi cyaan cook di food," he said. Falconer was quick to assure him that whatever cooked meals he needs, he can take care of it and the bill will be settled, cautioning him that he didn't want to give him money as someone might take it from his pocket.

Reid, who had no issues expressing himself this time, said: "No, mi can defend miself. No teck mi fi nuh idiot use same school whe you go, although a handicap school, mi guh. Nuh tek mi fi nuh idiot." He admitted though that at times, he gets frustrated as he said that there are some things that he still wants to do but can't.

"Sometimes it is rough, but then there are those days when it gets easier," he said.