PNP marches on Ministry of Finance 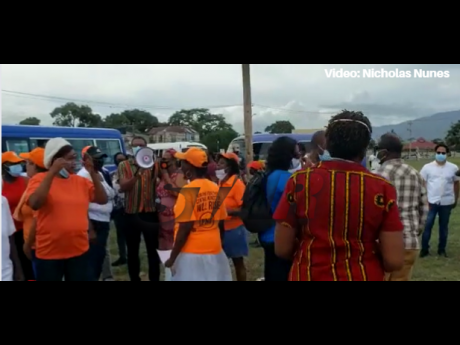 Members of the Peoples National Party (PNP) and their supporters are currently gathered in protest at Heroes Circle in Kingston.

They are about to March to the office of the finance minister, Dr Nigel Clarke.

Several opposition members of parliament are on hand, including Phillip Pauwell, Julian Robinson, and leader of opposition Mark Golding.

The PNP has been calling on the Government to put measures in place to arrest the runaway fuel cost in Jamaica.

In his budget presentation earlier this year, Golding outlined an approach that would see a cut in the gas tax and an easing of the burden on motorists.

The Government has not moved to implement this measure while gas prices rise on a weekly basis.

Golding has drafted a Ministerial Order under the Provisional Collection of Tax Act to cap the advalorem SCT on petroleum products (at the Ex Refinery price derived from an oil price deemed to be US$67.50 per barrel), where the oil price of Jamaica’s purchases exceed US$67.50 per barrel.

Golding is expected to deliver this to the Ministry of Finance for the Minister’s attention.