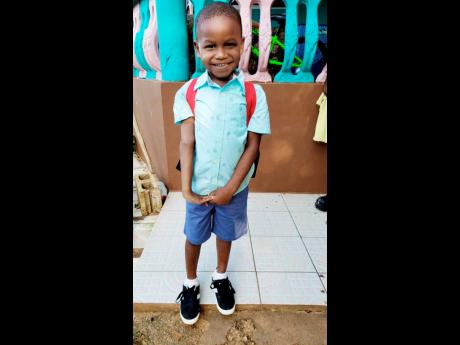 A six-year-old boy died in hospital on May 19, five days after he was admitted to be treated for a broken arm.

The boy's mother, Shanique Brown, said that he sustained the injury while playing at home on May 15. Sadly, the child, Neymar Bryan, lost his arm and then his life.

Brown said that her child was rushed to the Mandeville Regional Hospital for treatment. An X-ray revealed that the boy had broken bones.

"They said they would have to admit him because it was an open wound because the bone actually bore through the skin," Brown recounted.

After it was placed in a cast, the mother noticed that her son's hand was turning black and told medical personnel. She said that she was initially told by a nurse that it was normal. Her maternal instincts caused her to tell a doctor.

"I saw a doctor and told him about it and he saw that the cast was too tight, so he went downstairs for a cutter and removed it, and used him hand to widen it out. He told me to keep the hand elevated," she said.

On Wednesday, May 18, her son was taken into surgery, as doctors reportedly informed her that they would have to release pressure that had built up. However, she was greeted with news that the limb had to be amputated.

"Me see the doctor come and say is a life-and-death situation him [Neymar] inna because when they cut the hand and go in, the muscles were dead and the hand infected, and it can send toxins to the rest of him body and give him heart failure," Brown related.

Dumbstruck by the revelation, Brown consented for the procedure to be done. After surgery, she found it difficult to explain to her boy why his arm was removed.

"I wasn't the one who told him, it was his stepfather. Me just couldn't bear to see him with the one hand," she said.

Brown told THE STAR that hours after the surgery on May 18, little Neymar complained of being cold. She said that she informed medical staff, who told her to use blankets to keep him warm. She also said that he experienced difficulty eating and that doctors had a hard time finding his veins to extract a blood sample.

On May 19, at midnight, young Neymar asked his mother to put him in an upright position so he could drink some water. He then said: "Mommy, me love yuh enuh", before collapsing on the bed.

"Me get up from the chair at the bedside, me find out say him eyes just a stare and him not breathing. So me call to the nurse and tell her say me baby unresponsive and she say bring him to the nurses' quarters. Them call some doctors and them start pump him chest and me deh deh fi a while and dem tell me wait outside. I was there waiting, waiting and start pray," she continued. Her worst fears were soon confirmed. Neymar had died.

"My baby was a jovial child, you never see that little boy and him nah laugh. He wanted to be a doctor, because when he went to the hospital with a broken arm, the doctors were telling him how him brave to push back the bone and they said 'a one soldier you a guh be enuh' and him turn to the doctor and say a doctor him wah be," Brown said.

The hospital yesterday told THE STAR that an investigation, which will include a post-mortem, will be conducted to determine why young Neymar lost his life.