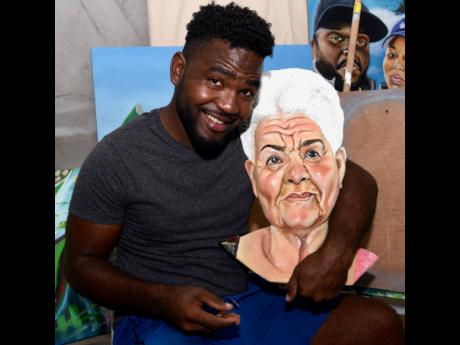 Roxroy Hutchinson shows off one of his pieces at his studio in Orange Bay, Hanover. 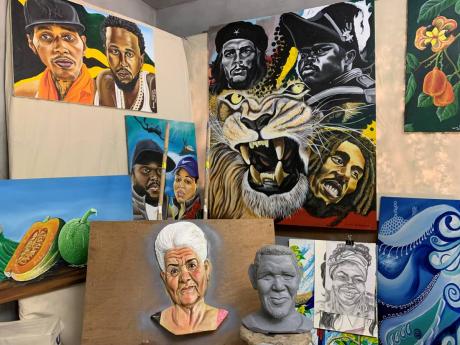 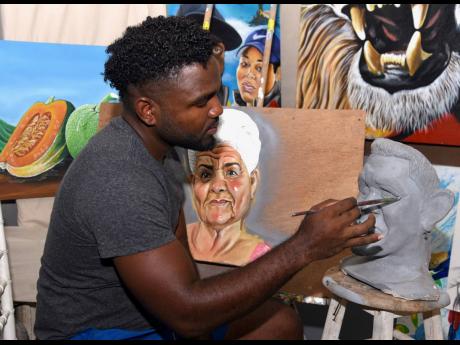 Hutchinson works on a sculpture of his father.
1
2
3

"The love that I have for my craft is what keeps me afloat" these are the passionate words expressed by 29-year-old self-taught sculptor Roxroy Hutchinson.

He creates and displays his works of art at his 'man cave' located in Orange Bay in his birth parish of Hanover.

"Art is the greatest part of me and where I can fit in everything," Hutchinson told THE STAR. He said that he became a sculptor because of his father's influence.

"After he died last year, I realised there was something inside me that I couldn't really express. I wanted to make a difference on his grave this year by making an actual headstone of him for which he will be remembered rather than a picture or painting," said Hutchinson, who is a former fitness trainer.

"It was recently that I found out that he too was an artist but didn't express it. I can now understand that it's been flowing through my bloodline."

He recalled that in 2013, he took up his pencils and books and started drawing, underlining his belief that art was always part of him. Five years ago, he made tiny sculptures that he kept to himself. But this March, Hutchinson took sculpting on at a professional level because of his father's headstone. His pieces are beginning to attract attention. As he meticulously painted another piece, he said that it can take up to a week to complete a sculpture.

"The interframe, mesh wire to hold the material in place, and carving with all of that has to be completely done. I also have to try my best to capture the realistic look of the person. It depends on the type as well, so sometimes colouring and details have to be right," Hutchinson said. "If the sculpture's material is easily accessible, I can turn that into anything with practice. But if it's a face, I have to gather material from the hardware and you don't really want to dump cash into something you're not really sure of."

Sculptures vary in size, detail, workload and time, and can cost up to $250,000. He admitted that his pricing has attracted some negativity, which makes him a little fearful. However, he believes that fear limits one's true potential. According to Hutchinson, a business like this can be profitable if you see where the need is and capitalise on supplying that need. As he looked at some of his artwork on the wall in his studio, he explained that he also paints, does mason work and previously made a go-cart because of his love for motor sports. Optimistic, Hutchinson sees himself being more successful in the next two to five years.

"I have recently started capitalising on most of my talents such as sculpting, welding, canvas painting, and drawing," he said. "I am exposing what is on the inside and then this will attract a wider audience."