Thief steals over 400 pounds of chicken 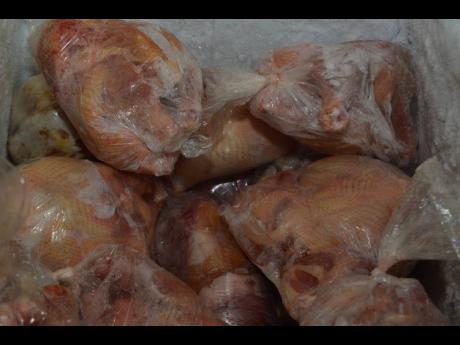 A 40-year-old man, who confessed to stealing over 400 pounds of plucked chicken, is to know his fate next month when he returns to the Kingston and St Andrew Parish Court for sentencing.

The female chicken farmer told the complainant to weigh the chicken in front of Hill, which amounted to 413 pounds. While the chicken was being weighed, Hill asked for a receipt. However, as the complainant was preparing the receipt, she turned her back to Hill, who took the opportunity to load his vehicle with the plucked chicken and sped away from the home. In driving away, Hill hit the complainant's husband. But he was later involved in a road crash and was captured by the police. Hill pleaded guilty to larceny by trick before Senior Parish Judge Lori-Anne Cole-Montaque.

"What was operating on your mind?" the senior jurist quizzed, but Hill did not respond. "Look at the trouble you put yourself in now, because you are going to remain here [in custody] for a little bit," she said.

Hill told the judge that he has been before the courts in the past for the same offence and was only ordered to make restitution.

"It will be not be so simple this time around," Cole-Montaque said. Hill was made the subject of a fingerprint order and was remanded in custody until July 6, when it is expected that he will be sentenced.