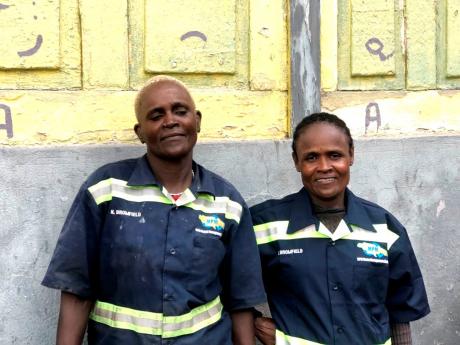 Unfazed by the stench that permeates a garbage truck, sisters Nadine and Sherine Bromfield said it brings them great satisfaction to keep the streets and homes of Jamaicans clean.

The Bromfields have been involved in solid waste removal for the past 13 years. They have been employed by MPM Waste Management.

They said that they have a genuine love for what they do, which is shown by the number of years they have been in the job. Their mentality is, it's a dirty job, but somebody has to do it.

As they spoke to THE STAR, Sherine, 48 and Nadine, a year her junior, were decked in their navy blue shirts and soiled pants, the stains evident of the day's hard work. They said that their days commence at 6 a.m., where they and four men begin emptying canisters filled with rubbish and cleaning roadways. Their smiles broadened as they boasted of being the only two women working on the garbage truck in Zone 4, which covers the island's most gritty Corporate Area inner-city communities.

"A we clean Charles Street, Kirk [Dunkirk], Duke Street, North Street, Tower Street, Elletson Road, all round the place, yea a we do it," Nadine shared. They ventured into what some might consider an unorthodox career by following in the footsteps of their eldest sister, Simone.

"I used to do hair, braiding hair downtown Kingston. Me do natural hair, mek wig, everything. Memba say one hand caah clap so me did a hustle my own. The hairdressing ting was a likkle hand to mout and me waan more. So me see my sister inna it and me did interested in it," Nadine related. Similarly, Sherine, a mother of two, said she sought employment on a truck by speaking to an associate of a garbage contractor.

"Nadine did get the work the Sunday and me see the man weh work with the contractor and me ask him if him caah get one a dem work deh fi me fi work pon the truck. Him say 'True, true? You woulda really want work pon the truck?' and me say 'Yes'," she recalled. He told her to call him at 5 a.m. the following day.

"But me call him two inna the early morning when me wake up. Him say me fi go back a my bed and call him in the morning," she explained. But instead of calling, Sherine trekked to the location where the truck was parked and waited for his arrival.

Although short in statute, Sherine bragged that she is most skilled in 'bailing off' a moving truck and has honed the craft of rolling the heavy drums to the back of the truck.

"Yea, yuh affi roll it certain way. Is a special likkle skill fi roll the drum dem. Me can roll all the truck wid me one hand. Yuh see right now, if the truck a go fast, there is none of the man dem weh can bail off like me. People see me already do it and dem can't believe, dem ask me if me is a man or woman. No care how fast the truck a go, me can jump off, go fi couple garbage bag and throw pon the truck and jump on back same way," Sherine said, much to the amusement of her confidante.

While the job brings them much satisfaction, Nadine indicated to the news team that she has encountered challenges, the most notable being five years ago when a taxi driver ploughed into her while trying to elude the police. Though it left her with a limp, she is still eager each day to clean the streets. The sisters said they receive a high level of respect from residents in their Smith Lane community and are pleased when persons thank them for keeping their areas clean.