Communities in Hanover western to get water 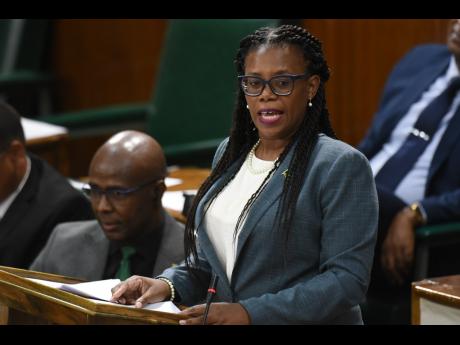 Member of Parliament for Hanover Western, Tamika Davis, makes her contribution to the 2022/23 State of the Constituency Debate in the House of Representatives, on September 20. contributed

The National Water Commission (NWC), in conjunction with Rural Water Supply Limited, has laid pipes to recommission the use of the tank at Dolphin Head Mountain in Hanover Western.

“This tank has been out of use for several years. It is with a sense of pride that I can now report that the communities of Middlesex, Greenland, Dias, Cacoon, Riverside, Kingsvale, Blenheim and all adjoining communities will all have access to running water,” Member of Parliament for the area, Tamika Davis, said.

She was speaking during her contribution to the 2022/23 State of the Constituency Debate in the House of Representatives, on September 20.

Ms Davis pointed out that some of the communities have been without water for over 30 years.

“This project was initially slated to be completed to coincide with the Emancipation/Independence celebrations, but was hampered by the unavailability of a transformer, which is currently being sourced by the Jamaica Public Service (JPS),” she noted.

Meanwhile, major repairs have been done to the Chambers Pen Primary School, which saw tiles replacing the board floors.

Ms Davis said improvements have also been made to the roof, which now sees students and teachers occupying an improved and safe building conducive for learning.

In the meantime, wiring for electricity has commenced in other parts of the community as well as the neighbouring districts of Askenish and Dundee Pen.

This is being dome at a cost of $127 million, with the help of the Jamaica Social Investment Fund.