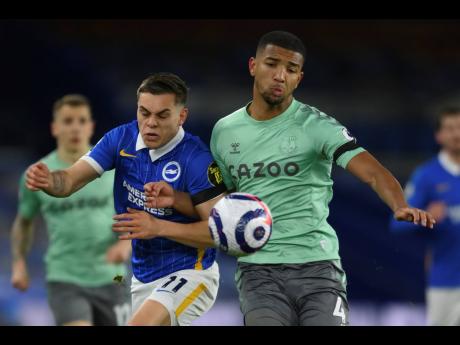 Brighton’s Leandro Trossard, left, fights for the ball with Everton’s Mason Holgate during the English Premier League soccer match between Brighton and Everton at the Falmer Stadium in Brighton, England, yesterday.

Everton failed to keep the pressure on local rival Liverpool in the race for European qualification, letting two points slip in a lacklustre 0-0 draw at Brighton yesterday.

Without top scorer Dominic Calvert-Lewin because of a hamstring injury, Everton managed just one shot on target - that coming in the 71st minute - at Amex Stadium. A late chance fell to substitute Alex Iwobi, who blazed over when free just inside the area.

The result left Everton on a four-game winless run and in eighth place, four points behind sixth-place Liverpool and seven behind West Ham in fourth.

In the battle to avoid relegation, Brighton climbed above Burnley into 15th place and is now seven points clear of third-to-last Fulham. The south-coast team has 33 points from 31 games for the third straight season.

Everton have been impressive on the road this season, with 29 points from their 14 away fixtures and their previous 10 away league matches featuring seven wins and only one loss.

But the Toffees struggled to impose themselves against a Brighton team who kept possession well, with centre midfielder Yves Bissouma the most accomplished player on the field.

Brighton lacked a cutting edge, though, with Leandro Trossard having a shot deflected just wide and Bissouma's ambitious overhead kick looping on to the roof of the net.