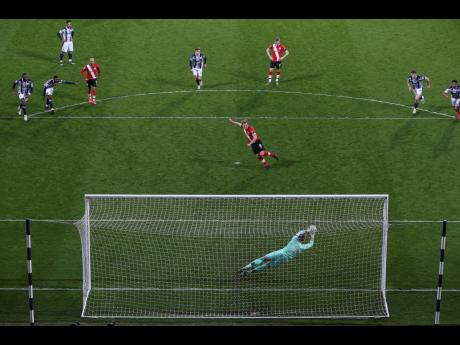 West Bromwich Albion beat Southampton 3-0 yesterday for a second straight big win in its unlikely bid to escape relegation from the Premier League.

Matheus Pereira converted a 32nd-minute penalty, which he earned himself for getting tripped by Southampton goalkeeper Fraser Forster, for the opening goal and Matt Phillips doubled the lead three minutes later with a close-range finish at the far post.

Callum Robinson ran on to a pass through the middle of Southampton's defence to shoot home left-footed for the third goal in the 69th as West Brom followed up its surprising 5-2 victory at Chelsea last weekend.

Sam Allardyce's team might have left its survival bid too late, though.

Eight points separate West Brom, which is in next-to-last place, and Newcastle, the team occupying the spot above the relegation zone. Both have seven games left to play.

Southampton, which had a penalty from James Ward-Prowse saved by Sam Johnstone in second-half stoppage time, remained 10 points clear of the bottom three, so their top-flight status is probably already secure for another season. But it was a worrying result and performance ahead of the team's FA Cup semi-final against Leicester on Sunday.

Ralph Hasenhuttl's side has conceded 12 goals in their last four league games.