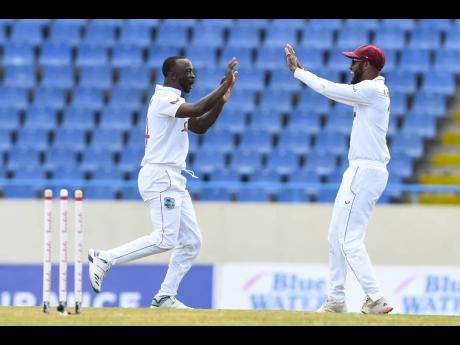 West Indies’ bowler Kemar Roach reacts with captain Kraigg Brathwaite (right) after one of the three wickets he claimed to help reduce Sri Lanka to 169 all out on Day One of the first Test in Antigua on Sunday, March 21.

West Indies Test captain Kraigg Brathwaite could not hold back his elation at hearing the news that the Test side has moved up two places in the latest ICC Ranking.

The West Indies' growth and progress is the result of the 2-0 win away to Bangladesh and the hard-fought 0-0 draw in the Test Series at home against Sri Lanka.

Brathwaite, now in England, where he is fulfilling his obligation as Gloucestershire's overseas professional in the County Championship, says the latest developments are just the beginning for the start of greater things to come for the regional side.

"I'm very proud of the team to jump two places in the Test ranking," he said. "I think this is just the beginning of good things to come. As a group, it shows that we can climb up the ladder, and it's just important for us to work hard and keep the belief and attitude to doing things right in the preparation and the execution on the field. Once we continue to do the small things right and have the right attitude, the sky is the limit."

Cricket West Indies Director of Cricket Jimmy Adams says that some of the latest moves the organisation has made are bearing fruit.

"Firstly, we should recognise the efforts of the players and support staff on the ground who have delivered results under pressure, and secondly, the large number of people working tirelessly in the background to support them in the face of multiple challenges," he said. "We continue to work hard towards our strategic goal of top-three rankings across all formats."

Brathwaite and the West Indies are preparing for the next Test series against South Africa in June, with St Lucia the possible venue.

The West Indies will then face Pakistan in a Test Series to be played in August as part of the next cycle of the ICC World Test Championship.