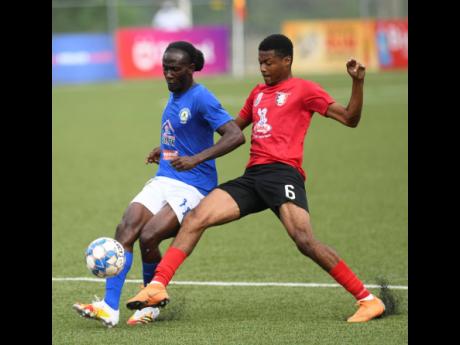 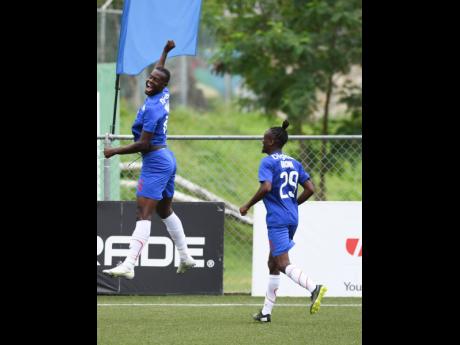 Portmore United’s Chevany Willis (left) jumps to celebrate his goal against Humble Lion at the UWI/Captain Horace Burrell Centre of Excellence yesterday. At right is his teammate Taja Brown.
1
2

Mount Pleasant Football Academy technical director, Wally Downes, credited Sunday's 1-0 win in the Jamaica Premier League (JPL) over Arnett Gardens to the impact of his second-half substitutes, who he thought increased the tempo on a tiring Arnett Gardens defence late in the game at the UWI/Captain Horace Centre of Excellence.

Kesslon Hall nodded home the game's only goal 11 minutes from time, as the St Ann-based club climbed to fourth in the standings with eight points, the same as third-place Harbour View and four off leaders Portmore United, who defeated Humble Lion 3-0 in the day's other game.

Mount Pleasant had a few opportunities in the first half through Hall, the best of which fell to the big striker three yards out but he was denied by Amal Knight making his debut for the 'Junglists'.

After the break, Arnett started the stronger of the teams and had chances through Earl Simpson, Hardley Barnes and Ronaldo Cephas.

However, the introduction of Daniel Green, Jourdain Fletcher, Gary Mills and Devonte Campbell for Latroy Laing, Kemar Beckford, Leonard Rankine and Francois Swaby, respectively, tipped the match back in Mount Pleasant's favour, and they had chances through Suelae McCalla and Hall, before Green's cross found Hall unmarked at the back post for the striker to head home.

"I knew it would be a tough game because there is a rivalry between these two teams. So we knew we were going to have a physical challenge in the first half.

"We created a few opportunities and should have been in the lead at halftime. But I was always confident that when the game-changers came on they would have an effect.

"The guys who came off worked really hard and I knew that about 60, 65 minutes, if we had an influx of quicker players and we were still in the game, then they would cause them problems, which they did," Downes stated.

He was also pleased with the organisation and resilience his team showed to see out the victory.

"It is a wonderful result for any football team to win one nil. We had lots of chances in the first half and didn't get our goal.

"In the second half the substitutions worked and we got our goal. We tried to play control football and it was difficult because you are on a knife-edge at one nil up."

"But we defended for our lives as they were throwing people forward looking for the equaliser and it was great that we had the resilience to stay one nail. We saw out the game very well and I was pretty pleased with that," he added.

Arnett Gardens coach Alex Thomas said they are still trying to find the right combination of players and that his team lacked a senior player to balance his youngsters.

"The young players have to understand that this comes with the experience. We have to keep moulding them as best as possible." he said.

Arnett sit ninth in the 11-team standings with three points from four matches.