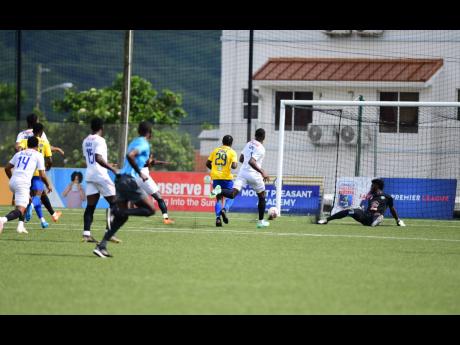 In the first half of the Jamaica Premier League (JPL), Tivoli Gardens could barely muster a win, notching one victory in their first five matches.

Come second half, the west Kingston team cranked up several gears and raced to three wins in a five-match unbeaten run.

In yesterday's second leg quarter-final, Clarendon's Vere United felt the full force of Tivoli's strong improvement when they were hammered 4-0 at the UWI-JFF Captain Horace Burrell Centre of Excellence.

Glendon 'Admiral' Bailey, Tivoli Gardens' technical director, who has not been present on the sidelines for the majority of the season, turned up yesterday to provide extra motivation for his team. And he said things are turning out exactly as planned, with the team hitting its stride at this stage of the competition.

"It makes no sense you peak too early and then when you reach at this stage you start to go down. So we planned it perfectly, to start our move at the right time and that has enabled us to play the way we are playing now," said Bailey, who has already led Tivoli Gardens to the Premier League title as head coach.

"And the way we have been playing we should be scoring more goals more frequently. However, we did a lot of background work and it paid off and this has built the club and players' confidence and let them know we can score goals," he commented.

Tivoli Gardens have now advanced to a semi-final meeting against fellow Corporate Area team, Cavalier Soccer Club, one of two automatic semi-final qualifiers, by virtue of finishing among the top two in the preliminaries. Cavalier finished second.

Vere United's head coach, Donovan Duckie, said his team did not react the right way after going behind.

"We started good and had a good plan, but we have to be more competitive and more professional," he said. "We have to give a better reaction, we cannot stop playing.

"But we have created a good foundation to add players and the intention is to improve," he added.

Mount Pleasant Academy claimed the other semi-final spot up for grabs yesterday, even as they drew 1-1 with Harbour View in their second-leg quarter-final matchup.

In the second game, Oshane Staple fired Harbour View into a fourth minute lead. However, Jourdain Fletcher continued his red-hot form and netted his fifth goal of the season to secure the 1-1 result.