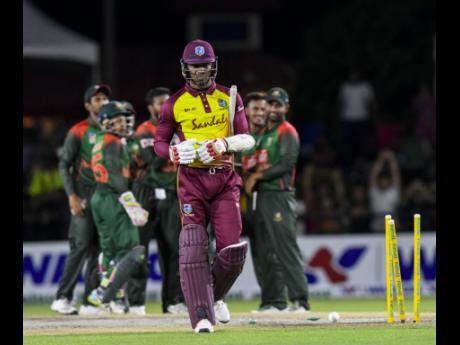 File photo shows Windies batsman Marlon Samuels leaving the pitch after being bowled in the third Twenty20 International against Bangladesh at the Central Broward Regional Park in Lauderhill, Florida, USA. Samuels was charged yesterday for breaching the ICC’s anti-corruption code.

The ICC said in a media statement that it charged Samuels, on behalf of the Emirates Cricket Board (ECB), with breaching four counts of the anti-corruption code for participants in a Ten10 league the board hosted.

The alleged offences include failing to disclose the receipt of any gift, payment, hospitality, or other benefit that was made or given in circumstances that could bring the participant or the sport of cricket into disrepute; failing to disclose receipt of any gifts and hospitality worth $750; failing to cooperate with the anti-corruption investigation; and obstructing or delaying the investigation by concealing information.

Samuels, 40, was given 14 days from September 21 to respond to the charges, the ICC statement said.

Cricket West Indies (CWI), the governing body for the sport in the Caribbean, said in a separate statement that it had been made aware of the charges.

"While CWI has yet to receive detailed information relating to this ICC investigation, CWI remains firm in denouncing any such activities within the sport and fully supports the ICC anti-corruption unit in their efforts to rid the sport of all corruption," CWI said in a statement.

CWI said the charges related to Samuels' involvement in a T10 league staged two years ago in Abu Dhabi.

Samuels represented the Karnataka Tuskers, but he did not play a single match.

The West Indies Players' Association (WIPA) also said it had conducted extensive anti-corruption seminars as part of its player development and welfare programme over the past seven years.

"We have further conducted joint seminars with CWI and have partnered with the Federation of International Cricketers' Associations (FICA) to have such information accessible at any time via an online platform," WIPA said in a statement.

"WIPA will continue to educate cricketers about pertinent issues that contribute to their personal and professional development and help to safeguard the sustainability and integrity of the sport.

"We take this opportunity to again urge all West Indian cricketers to play their part in protecting the sanctity of the sport we all love."

He retired from international consideration in November last year.

The highlight of his career were two sparkling half-centuries that earned him Player-of-the-Match awards in the finals of the 2012 and 2016 ICC Twenty20 World Cups in Sri Lanka and India, respectively, that helped the Windies claim the titles.

Samuels also spent two years on the sidelines 13 years ago, when he was handed a two-year ban by the ICC for "receiving money, or benefit or other reward that could bring him or the game of cricket into disrepute".