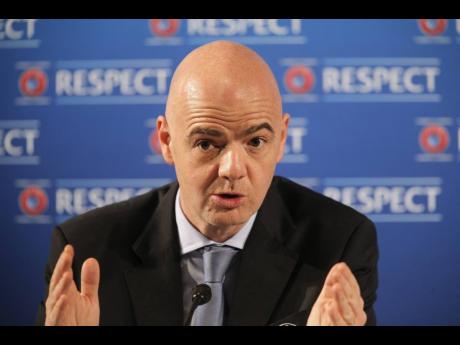 FIFA's drive to get approval in December for holding World Cups every two years stalled yesterday, one day after its president met with fierce resistance from European soccer leaders.

Gianni Infantino instead announced FIFA would host a remote "global summit" on December 20 to discuss the future of international soccer and "try to reach a consensus".

That fell short of staging an extra congress of 211 member federations which could formally vote on the planned biennial World Cups for men and women in which Infantino has invested his and FIFA's political capital.

"It is really important to listen to all the legitimate questions ... and to see how we can adjust the proposals that have been made," Infantino said at a news conference after chairing a meeting of FIFA's ruling Council.

Infantino's comment about exploring "what other kinds of events we can create" was a further hint that staging extra World Cups has not reached the broad agreement he aims for.

Sustained opposition from European soccer body UEFA - including threats to boycott future World Cups and veiled warnings by some of its members to leave FIFA - was joined last weekend by a rare International Olympic Committee (IOC) statement explicitly criticising an Olympic sport.

The IOC said FIFA was chasing extra revenue while crowding other sports from the sports calendar, promoting men's soccer that would overshadow the women's game and putting extra strain on athlete welfare.

"We have received some legitimate criticism," Infantino acknowledged. "When you are in the middle of all of that it's a little bit like a referee in a riot going on in a match.

"I'm just calling everyone to be calm and rational about it," he said.

Infantino has said FIFA organising a men's or women's World Cup every year is important to attract young fans, give more countries the chance to qualify and fund development globally to close the gap on European and South American dominance.

UEFA and South American soccer body CONMEBOL have resisted the plans. They cited the risk of overloading players and disrupting the balance of soccer's global schedule, including domestic leagues and their own successful international competitions for national and club teams.

"Everyone has taken note of the position of Europe," said Infantino, who had a heated online meeting Tuesday with leaders of UEFA and its 55 member federations.

The Europeans made clear biennial World Cups were unacceptable and one day later Infantino seemed to relent by insisting FIFA must try to reach consensus.

"How this consensus will look like, we will see," he said. "For me, everything is open. Maybe we make one step forward and one back."