United win in chaos; Bayern, Juventus, Chelsea do it easy 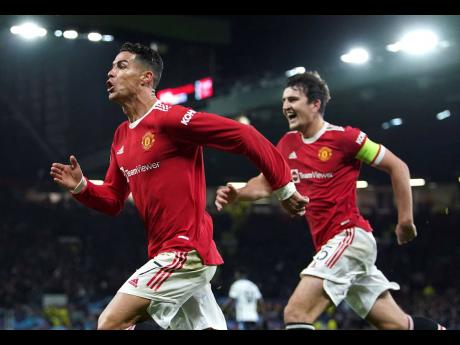 In a less chaotic manner, Bayern Munich and Juventus also recorded typical trademark wins to top their groups with three straight victories and no goals conceded.

Trailing 2-0 at half-time at home against Atalanta, United's wild season under manager Ole Gunnar Solskjaer appeared ready to derail with last place in the group beckoning.

Ronaldo put the club back on top, 3-2, in the 81st minute after goals from Marcus Rashford and Harry Maguire to deliver a second straight come-from-behind win at Old Trafford in the competition.

"His leap, his timing - it was the perfect header," United captain Harry Maguire said. "He has come up with a massive goal again in the Champions League."

United did it the hard way again after falling 2-0 behind following goals by Mario Pasalic in the 15th minute and Merih Demiral in the 29th. The team was jeered off the field after the half-time whistle.

Bayern routed Benfica 4-0 with late goals including one from Robert Lewandowski after stand-out saves by Manuel Neuer in the Lisbon stadium where they won the 2020 title 14 months ago.

It was an efficient 1-0 win for Juventus at Zenit St Petersburg, thanks to an 86th-minute goal by Dejan Kulusevski.

Defending champions Chelsea also cruised to a 4-0 win, against Malmo, but lost strikers Romelu Lukaku and Timo Werner to injuries.

Lukaku sustained a twisted right ankle getting fouled for a penalty that was converted by Jorginho for the second goal in the 21st minute, adding to the opener volleyed in by Andreas Christensen in the ninth minute for his first goal for Chelsea.

Werner, the strike partner of Lukaku, then had to come off with a hamstring injury just before half-time at Stamford Bridge.

Kai Havertz came on as the replacement for Lukaku and lifted a deft finish over the goalkeeper for the third goal in the 48th minute at the end of a breakaway led by fellow substitute Callum Hudson-Odoi.

Salzburg were the other group leaders in action, beating Wolfsburg 3-1 with goals from the kind of young forwards the Austrian champion excels in nurturing then trading on.

Barcelona, through Gerard Pique's goal, finally got a win, 1-0 against Dynamo Kyiv, to end some unwanted historic streaks for the club and stay in contact in the group led by Bayern.

Villarreal, who were beaten by Ronaldo's stoppage-time winning goal three weeks ago, won 4-1 against Young Boys to lift the Europa League champions from last to second in the group.

A 0-0 draw between Lille and Sevilla dragged down the average goals to three per game with 24 in total, one day after a 35-goal rush in the eight games on Tuesday.