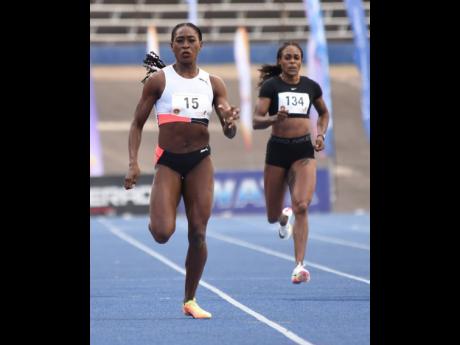 With the World Championships two weeks away, 2019 bronze medallist Rushell Clayton continued her 2022 comeback season with a strong performance at the Diamond League meet in Stockholm, Sweden yesterday.

The final Diamond League meet before the World Championships saw three Jamaicans in competition as they fine-tune their preparations before they make their way to Oregon. Clayton clocked a season's best 53,90 seconds to finish second in the 400m hurdles. The Netherlands' Femke Bol won in a meet and Diamond League record of 52.27. Ukraine's Anna Ryzhykova was third in 54.33.

Clayton is coming off earning a place on her second World Championships team, finishing third in the 400m hurdles final at the JAAA National Senior Championships in a time of 54.20. Coming off an injury that forced her to end her 2021 campaign and miss the Tokyo Olympics, Clayton has competed in six 400m hurdle events this season, with her times improving in every event. This is the third time that she has finished in the top three in a meet outside of Jamaica this year.

Former World champion Danielle Williams finished fourth in the women's 100m hurdles, clocking 12.59 seconds to equal her season's best. Olympic champion Jasmine Camacho-Quinn of Puerto Rico continued her winning form, clocking 12.46 for victory. Nigeria's Tobi Amusan was second in 12.50 while reigning World champion Nia Ali of the United States was third in 12.53. Williams finished third at the National Championships to earn a spot on the team to the World Championships.

In the field, World Championships silver medallist Danniel Thomas-Dodd was fifth in the women's shot put, unable to improve on her fifth-round effort of 18.77m. America's Chase Ealey won with a throw of 20.48m while Canada's Sarah Mitton placed second with 19.90m, and Portugal's Auriol Dongmo was third with 19.30m. Thomas-Dodd took home her seventh shot put title at the National Championships and has a season's best of 19.53m, which she made in May.

The Jamaica Athletics Administrative Association has until Monday to finalise their World Championships squad and president Garth Gayle says they will report to national camp in Eugene on July 10 for training before entering the athlete's village on July 15, the start of the games.