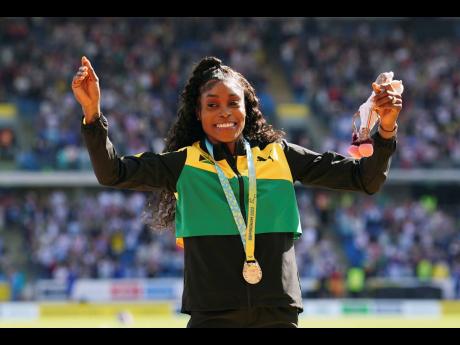 Elaine Thompson Herah waves on the podium after receiving her 200 metres gold medal in the Alexander Stadium at the Commonwealth Games in Birmingham, England yesterday.

A combination of unimpressive baton changes - with the third to the already double individual sprint champion among the worst - left Jamaica clinging on to a distant fourth place and at least three metres behind the likely medal-bound quartets.

Nigeria were streaking away to a new African record of 42.10 seconds and had already wrecked realistic home hopes of an England win.

But as the near-capacity English lunch-time crowd roared their approval of the leading nations roaring down the home straight, Thompson-Herah switched on the after-burners to make some of the world's best sprinters around her look like they were performing in slow motion.

The elated double Olympic Champion - the second-fastest 100m runner of all-time - beamed with pleasure as she joined her flag-engulfed teammates in celebration of the late snatch-and-grab raid on the bronze medal, albeit in an ultimately modest time of 43.08. "The 4x100m is a team effort, and perhaps this is not our strongest team, but I told them not to panic and just pass that stick around," Thompson Herah said..

GAVE IT MY ALL

"I just gave it my all to get back up to third and give my team a medal. I don't remember much until I saw Remona (Burchell - third leg) coming and our changeover wasn't perfect, but I didn't panic."

Thompson-Herah was brought in for the final on the anchor leg in place of Roneshia McGregor - who helped qualify but is more recognised as a 400m runner.

Natalliah Whyte, who endured an even more industrious week than her illustrious teammate by also contesting both individual sprints plus the relay heat, was visibly delighted, having come an agonising fourth in the previous evening's 200m final.

"Elaine ran an amazing leg, and I'm so very grateful to be going home with a medal," Whyte said.

Whyte took over from Kemba Nelson and handed the baton on to Burchell prior to Thompson Herah's medal-rescuing rocket-propelled anchor leg.

Earlier, Jordan Scott began the medal hunt on the seventh and final day of athletics but could only manage fifth in the triple jump with a leap of 16.11m as India's Eldhose Paul took gold with 17.03m.

Megan Tapper missed out on the medals by eight-hundredths of a second, fourth in 12.67 seconds, as Danielle Williams, also involved in a blanket finish, was awarded sixth in 12.69. High hurdles sensation Tobi Amusan, the new World Champion and record holder, added Commonwealth gold in a Games record 12.30.