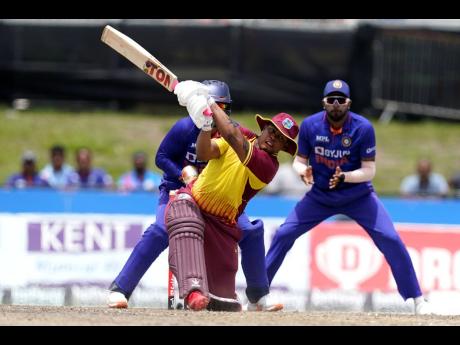 West Indies batsman Shimron Hetmyer on the go during the fifth and final T20 cricket match against India yesterday in Lauderhill, Florida. India won the match and the series. Hetmyer made 56 from 35 balls with five fours and four sixes. 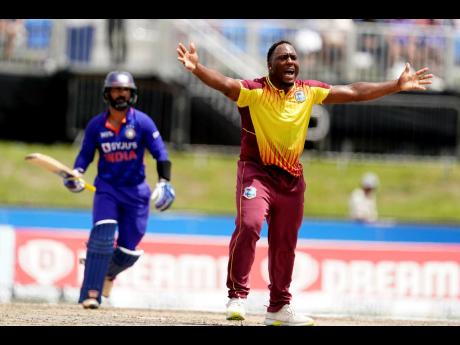 A Shimron Hetmyer half-century did little to ease the gloom of another depressing result as West Indies collapsed to 88-run defeat to India in the final Twenty20 International.

Needing a face-saving victory at the Central Broward County Park Stadium here yesterday, West Indies failed to find the grit needed and were dismissed for a dismal 100 in the 16th over in pursuit of 189.

The left-handed Hetmyer broke a run of low scores in his first series back in nine months, top-scoring with 56 from 35 balls before becoming the penultimate wicket to fall, one of two in the 16th over from leg-spinner Ravi Bishnoi who was the main destroyer with four for 16.

Left-arm spinners Kuldeep Yadav (3-12) and Axar Patel (3-15) blew away the remainder of the innings with three wickets hauls, Shamarh Brooks (13) and Devon Thomas (10) the only other batsmen to reach double figures.

Shreyas Iyer had earlier helped propel India to their eventual 188 for seven from their 20 overs, top-scoring with 64 from 40 deliveries.

Deepak Hooda chipped in with 38 from 25 deliveries while stand-in captain Hardik Pandya got a 16-ball 28, India's batting once again clicking despite a raft of changes from Saturday's fourth game.

Fast bowler Odean Smith was the Caribbean side's best bowler with three for three from his four overs, all of his wickets coming at the back end.

"It is a game of skills versus skills and today we weren't good. We didn't put partnerships together, except for Hetmyer.

"When you come against one of the top teams in the world then execution is important."

Opting to bat first, Iyer anchored the innings up front, posting 38 with Ishan Kishan (11) for the first wicket before adding a further 76 for the second wicket with Hooda who lashed three fours and two sixes.

Iyer belted eight fours and two sixes before perishing at the end of the 13th over, caught and bowled by seamer Jason Holder, but Hooda struck a brace of fours and sixes to help energise the innings late on.

In reply, West Indies had their top order wiped out by Axar, the 28-year-old bowling Holder with the third ball of the innings without a run on the board, before having Brooks stumped and then also bowling Thomas in the fifth over at 33 for three.

When Kuldeep hit Pooran in front for three in the eighth over at 50 for four, West Indies were in even deeper trouble but Hetmyer counter-attacked, blasting five fours and four sixes in the best stand of the innings - 33 for the fifth wicket with Rovman Powell.

Once the stand was broken, however, West Indies lost their last six wickets for just 17 runs in another stunning collapse.