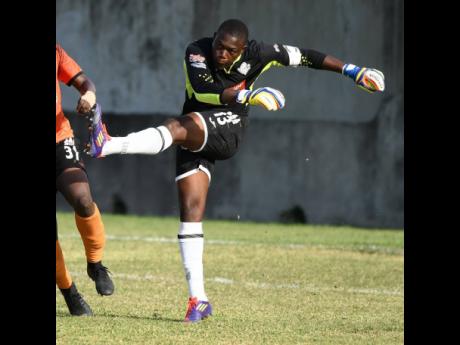 Waterhouse FC's goalkeeper, Kemar Foster, hopes he gets an opportunity to showcase his ability against one of the world's best football nations, despite acknowledging that he is down the pecking order for the Reggae Boyz' friendly clash with Argentina on Tuesday.

Foster, the outstanding goalkeeper for the Jamaica Premier League (JPL) last season, is one of three shot-stoppers named to the squad and falls behind captain and No 1 custodian Andre Blake and on-loan Aldershot Town goalkeeper, Dillon Barnes.

The 29-year-old Foster is, however, prepared to wait and grab the opportunity should he be called on by Icelandic Reggae Boyz coach Heimir Hallgrimsson, during Tuesday's friendly encounter against FIFA's No 3-ranked Argentina.

"I am very grateful to be back in the squad. This is one of the best teams in the world, so this would be a great opportunity. I am just staying focussed and looking to work hard in the training sessions and hope that I do get called on to get piece of the game.

"Argentina are one of the best teams in the World Cup, so an opportunity like this would be great. So I hope to get the chance to go out and showcase my talent," Foster told STAR Sports.

Foster had an outstanding national Under-20 career, but only made his senior international debut in August when the Reggae Boyz played Qatar in the Austria mini football tournament. That match ended in a 1-1 draw.

He spent his senior career playing locally, starting at Portmore United but suffered a terrible broken leg that kept him out of the sport for more than two years. He returned to Portmore in 2018 but transferred to Waterhouse last term and was back to his best throughout the season.

The custodian insists that his focus would not be on the diminutive Paris St German legendary midfielder, Lionel Messi, should he get the opportunity to play in the friendly match.

"We have a very good crop of players and with a new coach we want to go out and represent as best as possible," Foster said.