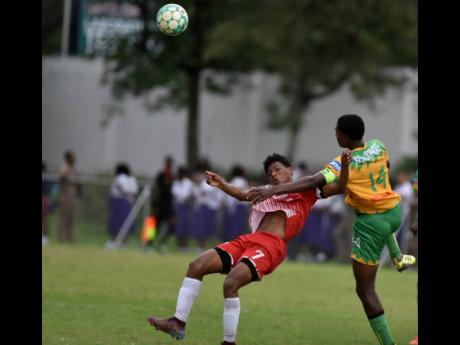 Excelsior High’s Antwan Johnson tackles Campion High’s Kai Myles during their ISSA/DIGICEL Manning Cup match at Campion yesterday. The match was stopped by the referee because of heavy rain.

Confident that the identity of Camperdown High is returning, head coach Donovan Lofters is hoping that fortune and execution come at the right time in their push for the ISSA/Digicel Manning Cup second round, starting with their Group E clash against Wolmer's Boys' this afternoon at 3:30.

Camperdown are in fourth place with five points but are on a two-match unbeaten streak, which included their first win of the season, a 7-0 thrashing of Kingston High. Wolmer's had their winning streak end on Wednesday with a 3-1 defeat by leaders Mona.

Lofters, knowing there is little margin for error in their bid to advance to the next stage, emphasised the importance of being more clinical in the final third after their difficulties in their 1-1 draw with Hydel on Wednesday.

"We like to pass the ball and be patient. Inconsistency has been a major problem but I am feeling a little bit better with the performance of the team, and how we are handling the ball. I'm just not pleased with the way we have been executing in the last third," Lofters told STAR Sports.

Lofters has promised a change in the system for Camperdown's best possible chance for victory, as they look to overtake third-place Hydel, who are on seven points, in the standings as well as to close the gap on Wolmer's who are in second place with 12 points.

Lofters, however, is focused more on his team's execution and not the opponents, hoping that they can put together a complete performance as they begin a stretch of crucial home games.

"For me, it's not about Wolmer's. For me, as long as we can do what we are supposed to do, increase the tempo and play with a (good) mindset, I think we can scrape through. All these games are must-wins, but the good thing is that we will have these challenges right after the other," Lofters said.

Wolmer's head coach Jerome Waite says that they will not take Camperdown lightly and believe that the short turnaround time will motivate them to respond after Wednesday's defeat.

"Camperdown is a useful team. They have some quality within the team but surprisingly they are struggling," Waite said after the game.

In Group B, St Catherine High will face Holy Trinity.