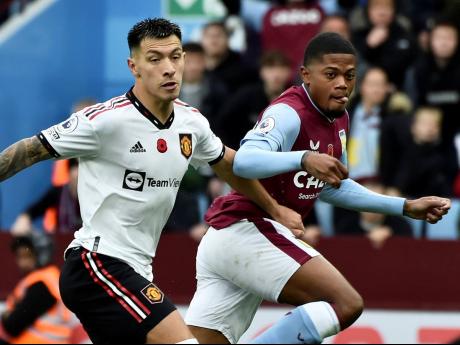 Reggae Boy Leon Bailey, currently in Dubai for a training camp, says he is feeling "great" under the direction of new boss Unai Emery at English Premier League (EPL) club Aston Villa where the "spirit is amazing".

"We're getting there," said the 25-year-old Jamaican winger, who signed for Villa after the departure of England attacking midfielder Jack Grealish to Manchester City last year in a PS100 (US$121 million) move.

Bailey has struggled at times in Villa's claret and blue colours, however, since completing a PS30 million ($36 million) transfer from German club Bayer Leverkusen.

Before the winter break for the Qatar World Cup - in which Jamaica were not involved - Bailey scored the first goal of the Emery era in the 3-1 win against Manchester United at home while also registering an assist during the 4-2 defeat in the Football League Cup to Erik ten Hag's side just a few days later.

Speaking to Villa TV, Bailey highlighted the positive feeling among the group after completing their first day of training in Dubai on Tuesday, as they continue to prepare for the return of EPL action on Boxing Day when they host Liverpool.

"The spirit within the group is amazing," said Bailey.

"Even with the young lads coming up, it's really nice to bond with them, share experiences with them and help them. It also gives us a lot of responsibility.

"It brings us together a lot and I think this is something nice that we're here in Dubai, really bonding with each other, and most importantly working together to better ourselves for the coming games."

Bailey underscored how much he enjoys playing under the new regime since manager Steven Gerrard's departure. Villa currently sit 12th in the EPL table.

"I think it's very clear how he (Emery) wants everyone to play and we're all adapting. We still have a lot of work to do but we're getting there," added the winger.

"The important thing is that everyone is confident and believes in what he is about. We're just trying to do our best to capitalise on every bit of information he gives.

"My role has been good, I feel great. I think we're playing amazing football and we just need to keep enjoying our football, that's what I'm doing and it feels good."