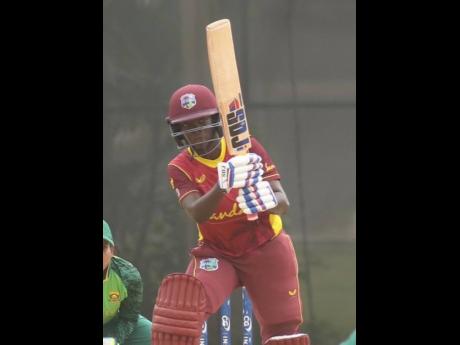 Asked to chase 261 under lights in the second ODI at the Vivian Richards Cricket Ground on Tuesday night, West Indies again folded meekly, capitulating for 118 in the 32nd over, despite the 25-year-old Williams producing a defiant, unbeaten 54 from 80 deliveries.

The right-hander counted four fours and a six in her second ODI at the venue but lacked support with no other batsman reaching double figures in yet another lacklustre batting effort.

On Sunday, West Indies Women slumped to an identical 142-run defeat in the opening ODI when they mustered only 165 in pursuit of 308.

"I am very disappointed. I think in both games we haven't batted," said head coach Courtney Walsh.

Player-of-the-match Amy Jones had earlier propped up the England Women's innings with an unbeaten 70 from 63 deliveries, while Sophia Dunkley struck 57 from 56 balls, ensuring the tourists rallied to 260 in the 49th over.

Emma Lamb with 25 and Tammy Beaumont with 21, put on 42 for the first wicket and when three wickets tumbled for 40 runs, Dunkley struck seven fours in adding 51 for the fourth wicket with captain Heather Knight, who made 25.

Both fell within the space of 20 deliveries to leave England Women on 146 for five in the 28th over but Jones lashed eight fours as she held the lower order together.

West Indies Women then had a nightmare start, Bell and Cross combining to wipe out the top order and reduce the hosts to eight for four in the fourth over.

Captain Hayley Matthews, who made one, drove at a wide ball from Bell and edged to first slip at the start of the second over, left-hander Kycia Knight with a duck, edged behind off another wide delivery two balls later, while Aaliyah Alleyne who contributed two, played back and nicked a defensive stroke to the 'keeper off Cross at the start of the next over.

When Shemaine Campbelle missed an in-swinging full-length delivery from Bell and was lbw in the fourth over, West Indies Women were in danger of an embarrassing rout.

Williams, however, strung together a series of small partnerships - posting 20 for the fifth wicket with Chedean Nation (17), 21 for the sixth with Shabika Gajnabi (0) and 35 for the seventh with Chinelle Henry (13) - to help West Indies Women past the 100-run mark.