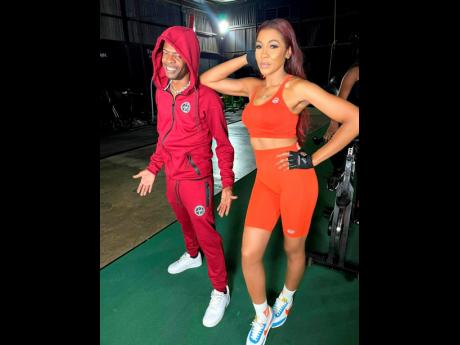 Mr Lexx and D’Angel on the set of the music video medley for the Gal Alarm rhythm.

Mr Lexx is back with another anthem for women, this one hailing the Good Wife.

Produced by YRush on the 'Gal Alarm' rhythm, the track hails the incomparable and superior first lady, so it only made sense to recruit D'Angel to sing the chorus.

"I was recording for Rush and came up with an idea and started singing it and I was like 'yow, I probably need somebody to sing it'," Mr Lexx told THE STAR. "To how mi did a sing it, it sounded just like Angel, so we called her up like, 'yow, sis come sing this for mi' and she did a great job."

Though the artistes have been long-time friends, this marks their first official record together. D'Angel shared that several years ago, when she was not really thinking that she wanted to do music, they used to experiment with musical ideas. Fast-forward to two months ago when they recorded Good Wife, a process she described as easy and seamless.

"YRush actually called me out of my bed and said dem have the idea fi me and when Mr Lexx a sing it, it sounded like something that suits my voice and personality," she said. "True mi a good wife, [and] good wife reigns forever, they said I should come in on the track. When I heard the idea, I couldn't resist because only a good wife coulda sing pon dah track yah and mek it hot. I had to wake up my voice and go to the studio to record it quick and fast."

She added that she didn't hesitate to do the song as she loves to support her fellow artistes and play her part in building the local music industry. Plus she said "Mr Lexx is very talented so mi never hesitate."

With the music video, which is a medley, debuting on the weekend, Mr Lexx said the feedback looks promising.

"Mad girls hit me up and dem like it," he shared. "You know how girls stay when dem relate to a song; dem a go need that type of song to walk out inna the video. It's been a minute since mi have a current hit song so, hopefully, dah one yah do it."